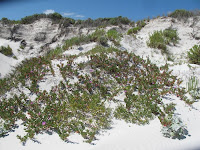 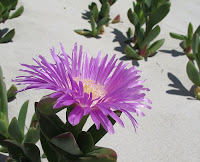 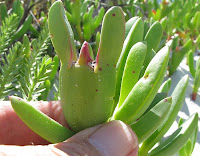 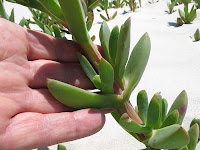 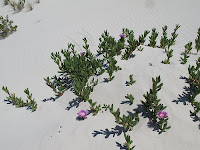 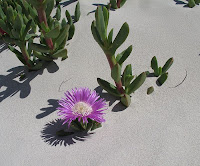 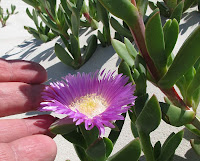 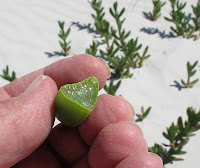 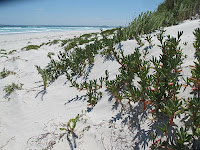 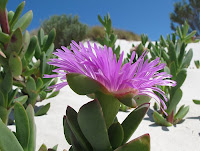 
Carpobrotus belongs to Aizoaceae, a family that contains many succulent plants that grow in harsh, dry and exposed environments. Carpobrotus virescens is found on dunes and coastal limestone, often in the front line to take the full force of strong sandblasting winds and salt-spray. The strong winds blow the sand around to either expose or bury this plant, but it has evolved to exploit these conditions and seems to suffer no ill-effect.

Carpobrotus virescens is only found in Western Australia from the Nullarbor to Exmouth, but is relatively poorly collected with very scattered herbarium collections. This situation probably reflect its chunky succulent nature and the problems of pressing these specimens, or storing them in alcohol, but it is a very common and widespread coastal species and probably exists even further afield. In SA, Victoria and Tasmania, Carpobrotus rossii is a similar coastal species, which is also recorded from WA, but strangely only from the Peron Peninsula region, south of Carnarvon. In Victoria, NSW and Qld, there is Carpobrotus glaucescens another coastal species.

The WA coastal Carpobrotus (C. virescens) is a very robust plant spreading to 4 metres with stouter foliage and larger flowers than the inland Carpobrotus spp. The flowers commonly exceed 6 cm (2.5“) diameter and the petal-like staminodes (sterile stamens in transition to actual petals) are a very bright light purple with white bases. These can bloom from June to January, although locally after September would be more usual. The fruits are ripe when soft and coloured to provide a moist, sweet and slightly salty refreshment in the new year.