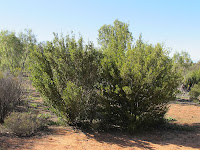 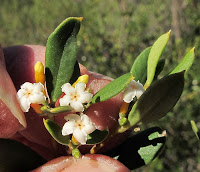 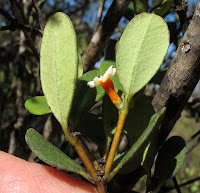 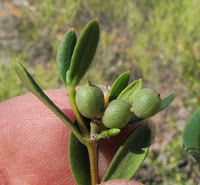 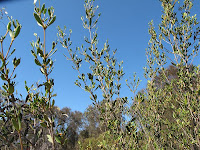 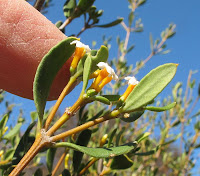 
Near an Aboriginal site at Mt Andrew (85 km or 50 odd miles WSW of Balladonia) this species is especially common and produces a very sweet and tasty fruit (orange and soft when ripe) that I ate without any ill affect, whereas in coastal areas particularly interstate, it is regarded as inedible. Even the Victorian Department of Primary Industries (DPI) states “Although the fruit of Sea Box is eaten by coastal birds, it is toxic to humans.”

Alyxia buxifolia is widespread across southern Australia, but is mainly a coastal or near coastal species in SA, Victoria, Tasmania and NSW. In WA it is also coastal from Busselton to north of Perth, of which all these locations (including those interstate) have an average annual rainfall of over 800 mm (31.5”). Whereas where I ate the fruit, the plants belong to an inland and northern WA coastal population, which grow in a different climate zone with an annual rainfall of less than 250 to 500 mm (10”-20”), which may produce reproduction and seed dispersal differences between these populations.

Around Esperance it is widespread in the mallee region, growing on a variety of soils, but usually in a sandy loam over rocky ground, granite or limestone.  Alyxia buxifolia is a member of the Apocynaceae family, with most species restricted to tropical and sub-tropical regions, although not well represented in Australia. Some overseas family members have edible fruits, although a number of others are regarded as poisonous, so care is obviously required if consuming. A number of species are regarded as being ornamental and in some countries are grown commercially.

Alyxia buxifolia is commonly around 3 metres (10’) in height, but in sheltered positions (under eucalypts) can grow taller. The branches are held upright, but with opposite oval leaves they can become quite bushy, although in very dry exposed locations plants can also be short, open and sparse. The small (around 1 cm or 3/8”) tubular orange and white flowers are probably pollinated by moths or something similar with a slender proboscis. Inland, some flowers can usually be found on the shrub at most times, but they tend to be more common during the latter half of the year.   Fruits are more common though summer.