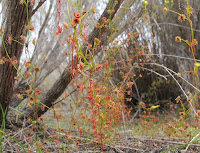 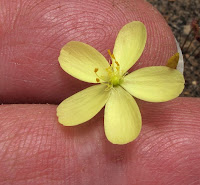 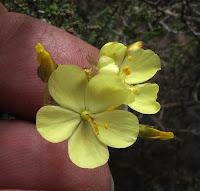 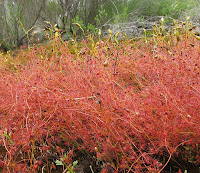 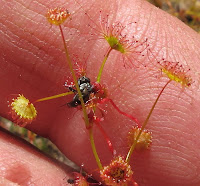 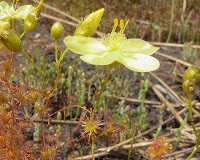 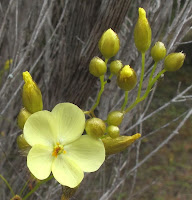 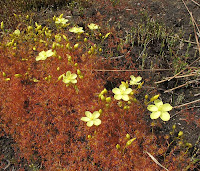 
Droseraceae is the family of the worldwide Drosera genus, commonly known as Sundews. There are hundreds of species with new ones being added regularly, although Australia has the greatest number of species, with most of those situated in Western Australia. Sundews have various shaped leaves (lamina) that have long sticky glandular hairs that trap insects, which when they die are absorbed into the plant as their main source of nourishment.

Their roots are poorly developed for nutriment uptake from the soil as most plants do, although they are used to absorb water and anchor themselves, or if tubers, store food for next season’s growth. This is done because they generally grow in seasonally wet environments with highly acid soils that make mineral absorption poor, so must rely on other means, which with these plants is mostly from decomposing insects. This adaptation also means other plants are unable to establish themselves, thereby providing an open habitat with little plant competition.

Drosera moorei is scattered around Esperance, but with its main distribution inland between Southern Cross and Kalgoorlie, where like its more southerly colonies are found in shallow sandy loams over granite in low-lying areas or drainage zones. Here it can form dense colonies by dropping vertical roots from leaf axils, which develop into tubers for next years growth, thereby producing large tangled masses of plants ready to trap any inspecting insect.

The production of tubers permit these perennial Drosera spp. to thrive in habitats that are wet during winter, but dry out during summer. This means that the vegetative parts above ground (stem and leaves) die, but can quickly regrow to take full advantage of a short growing season in the low rainfall area where these plants grow.

Drosera flowers come in many colours although white would be the most common. Yellow coloured flowers are less frequently encountered and the yellow tuberous spp. were until recently lumped into the Drosera subhirtella complex, but without going into too much detail, their distribution is a good indication of species, although some do overlap. See Nuytsia Vol 13, No 1, 1999.

D. sulphurea is largely confined to the Albany district. D. intricata is widespread, but generally has a broadly obovate shaped leaf. D. subhirtella is mostly inland from the Perth region to Hill River, to Lake Grace and the Stirling Range, plus is the only one with glandular hairs on the stems, petioles and pedicels, all others are glabrous in these places (without hairs). D. zigzagia has limited distribution to the north and south of the Hyden region, it is also the only yellow flowered species that is erect, rather than lax as are the others.

Drosera moorei is known to flower during September and October, although local rainfall may cause slight variation to these times.

Posted by William Archer at 7:46 PM