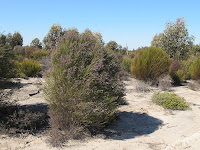 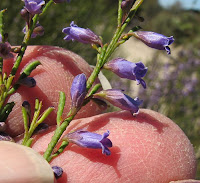 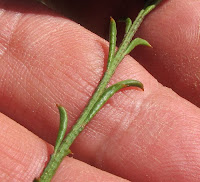 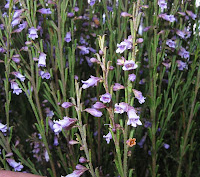 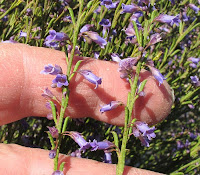 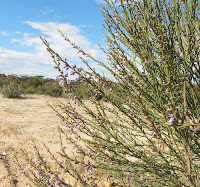 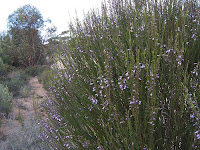 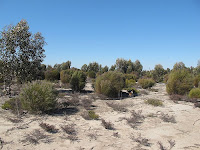 Eremophila dichroantha is largely endemic to the Esperance mallee region, extending from the Cape Arid area in an arc to Norseman and around to the Ravensthorpe district, with Esperance being centrally placed. It is a bushy broom-like shrub to 3 metres (10’) in height, although mostly only a little over half of that size.  After bushfire, compact colonies can develop in drainage zones, where powdery clay soils over limestone (favoured growing medium) are often found,

The hairless leaves and stems have prominent warty swellings (tuberculate) and the leaves have recurved tips (uncinate) to provide its common name. The branches are mostly upright but not stiffly, so can sway gracefully in moderate winds. The violet flowers (occasionally mauve or bluish) although small (to 1 cm or 3/8” in length) are produced in considerable numbers and are quite ornamental although not striking.

Flowering is recorded from August to November, but seasonal rainfall and mild weather conditions play an important role in their exact timing, with late July to September being common, but flowering after this period requiring good (late spring) rainfall.