Senna pleurocarpa has three varieties of which two occur in Western Australia and both are found in the Esperance region (third variety restricted to Qld).  The variety angustifolia is restricted to WA, whilst var. pleurocarpa occurs in all mainland states except Victoria.  The local varieties mainly differ from each other by the number of leaflets each has, with var. pleurocarpa having 5-7 pairs and var. angustifolia 8-10.  Mention is also made of the bracts, leaflet and pod size, although locally there is very little difference between them and sizes sometimes are greater or smaller than those specified.

The number of leaflets I find also varies, with var. pleurocarpa ranging from 3-7 pairs and var. angustifolia from 7-9 pairs even on the same plant, so locally identification can be tricky and why I include both in this post.  It is highly likely that other forms exist elsewhere that differ more, but they do come close to merging around Esperance.  Both varieties are fast growing, but relatively short-lived, so need regular bushfires or soil disturbance to keep them around, otherwise they disappear until after the next bushfire. 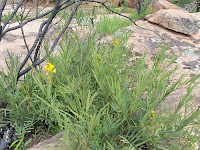 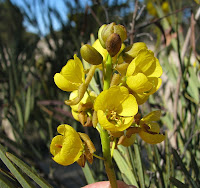 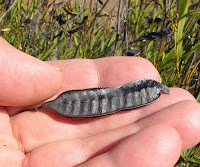 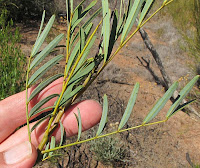 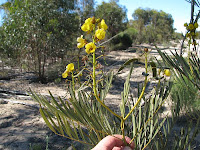 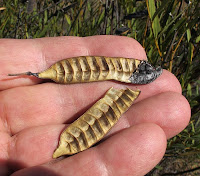 This variety I encounter more on and around granitite outcrops, with seed being distributed (probably by birds) into surrounding areas to produce plants in differing habitats, but usually on disturbed soils.  It commonly grows to 1.5 metres (5’) in height, although it can grow taller and is recorded flowering from July to October.  However locally September to November is more usual.   Most of my sightings of this variety have been to the north and northeast of Esperance where granite outcrops are more common. 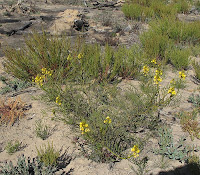 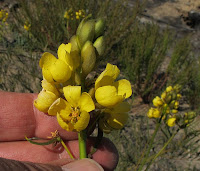 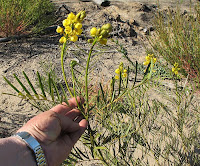 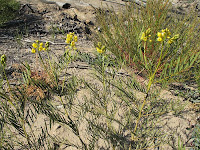 This variety I find more often in sandy loams, particularly over limestone and mainly to the NW of Esperance, but also in the NE to overlap with var. pleurocarpa, although not growing together.  It tends to spread more and is commonly less than 1.5 metres (5’) in height.  Flowering is recorded anytime between July to April, although local rainfall would have a considerable influence and in summer dominant rainfall zones (where this plant also grows), so would probably bloom then.  Around Esperance there is little difference in the flowering period of either variety, probably reflecting similar weather conditions.