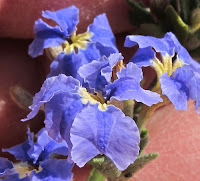 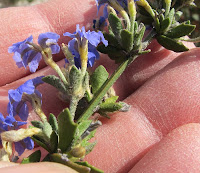 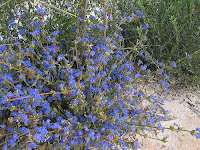 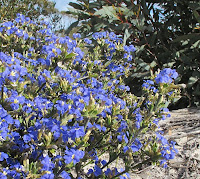 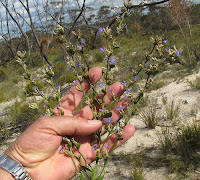 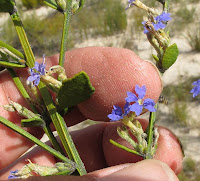 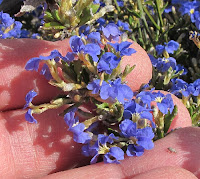 
The genus Dampiera belongs to the large and often highly colourful Goodeniaceae family. These are largely fast growing herbaceous species, usually amongst the first to germinate after a bushfire and readily colonising disturbed soils. However, most are relatively short lived and largely disappear after a few years as larger plants begin to dominate.

Dampiera fasciculata is so named because of the leaf clusters on the upper branches; it is also recognised by the triangular shaped stems that have rounded corners. It is a very common sub-shrub particularly around the coast (although it also occurs inland in non-calcareous sandy soils) from Cape Arid (east of Esperance) to the west of Albany. It is found in most heath areas, around granite outcrops and on gravel soils, plus being a colonising species is often seen along roadsides.

In open habitats the Bundled-leaf Dampiera is a spreading clumpy plant to ½ metre (20”) in height, or when young or growing near larger species as a more scraggly semi-prostrate one. The flowers are mostly deep blue, although some can be paler, but all are colourful and very eye-catching. Flowering is recorded from August to November, although with good rainfall and mild temperatures, this can be extended to the end of the year.