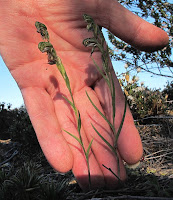 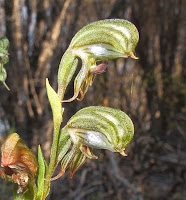 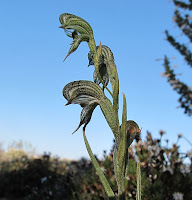 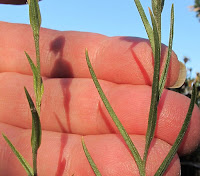 
The Frog Greenhood orchid is mainly an inland species, commonly occurring in sheltered habitats under shrubs or between rocks in sandy loams over granite, gravel or limestone. It is found inland from Geraldton to the Stirling Range near Albany, across to the north and northeast of Esperance, then onto Norseman, to return further inland to the Geraldton region.

It mostly grows in small colonies and being around 15 cm (6”) in height with small dark flowers, it is commonly overlooked as the viewers attention is usually taken by larger and more colourful shrubs in a seldom visited location. The bent shape of the labellum (which some liken to a frog and how this plant got its common name) is unique to Pterostylis sargentii and combined with its small size and the absence of a basal rosette of leaves, it is unlikely to be confused with other species.

Flowering time is recorded from July to November, but this would be highly dependent on variable seasonal rainfall, which on average is between 20-40 cm (8”-16”) per annum, but often considerably less.