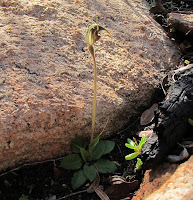 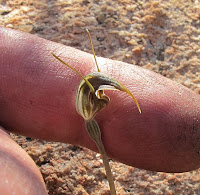 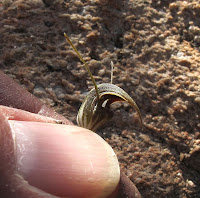 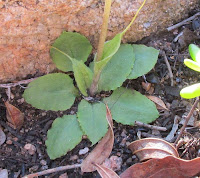 This largely inland mallee greenhood is rarely seen within the Esperance region, although it is found on rocky habitats from Ravensthorpe to south of Kalgoorlie, then SE to Balladonia. However the above was photographed on a large granite outcrop called Mt. Newmont 150 km (93 miles) NE of Esperance, which is a small distribution extension for this species, although not unexpected.

A few plants in a single colony were encountered on the upper southern facing slope, growing in shallow loam between rocks and boulders, 2-3 years after a bushfire. I presume it is called the Shy Greenhood as it mostly occurs in remote locations, so is seldom seen. It appears to be rather alien when compared to other Pterostylis spp. due to the exceptionally long curved dorsal sepal, but it is not named (P. allantoidea) after that, but because of the highly irritable, sausage shaped labellum (seen in the first photo).

Flowering is recorded during August and September that also agrees with my sighting.