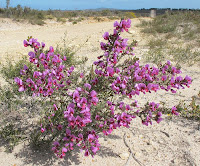 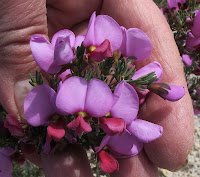 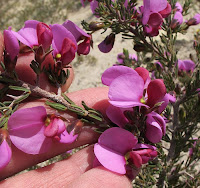 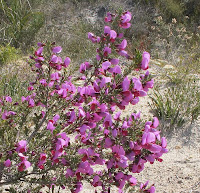 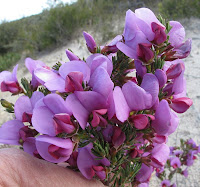 
This pea-flower from the Fabaceae family, would be one of the most spectacular with large brightly coloured pink/purple/red flowers and well deserving its common name of Painted Lady, but when not in bloom these plants would not attract a second glance as they are insignificant and dissolve into the background. Gompholobium scabrum is widespread, ranging from north of Perth to east of Esperance, but although collectively common, locally they are usually found in small groups or scattered individuals
Around Esperance it favours a heath habitat in moderately flat non-calcareous sandy soil over weathered clay and coastal limestone, so would be slow draining and retain moisture for extended periods. In these windswept environments, the vegetation is undulating to around a metre (3’) in height, from which Gompholobium scabrum just protrudes.
Most Gompholobium plants produce 4 seeds per pod and once were the only members of this genus, but G. scabrum and several others have just 2 seeds per pod. This feature was initially used to place them into different genera, the other called Burtonia, so Gompholobium scabrum was previously known as Burtonia scabrum (now discarded).
The foliage is only about 1/2 cm (1/4”) in length, but are digitate (leaf lobes coming from a central axis, like fingers from a hand), whilst the prolific number of flowers are around 2 cm (3/4”) diameter. The flowering period is recorded from August to November, but weather conditions determine whether they bloom earlier or later, although the months of September/October are reasonably reliable.

Posted by William Archer at 3:54 PM