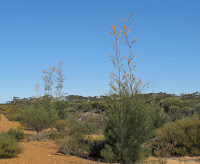 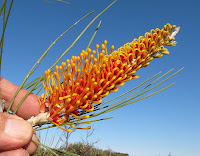 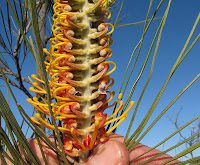 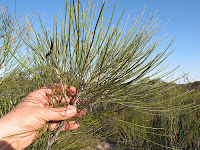 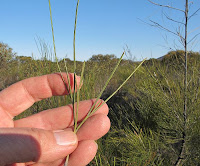 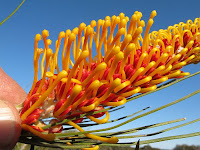 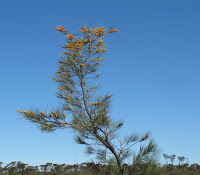 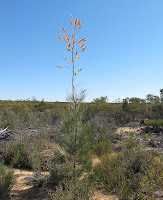 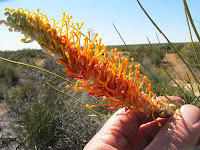 The Flame Grevillea like its name suggests is a most impressive looking small tree with vivid orange/red flowers, of which the native honeyeating birds are regular visitors to dine on the floral nectar. The plants I saw in two widely separated colonies, were to 5 metres (16’) in height, but apparently they can grow to 8 metres, plus expand considerably in width.

This remarkable Grevillea is mostly an inland species being mainly found inland from Geraldton to the Kalgoorlie region, then south to near Peak Charles (120 km or 75 miles NNW of Esperance) and only just extending into my Esperance survey district. One of the two colonies seen was a little south of Peak Charles growing in deep sand, whilst the other was growing in gravel off Fields Road around 110 km (70 miles) NW of Esperance and probably represents the extent of its south-eastern distribution. Each colony had between 20-40 plants that were restricted to a few hectares/acres, although 40 km further west they are quite common and widespread.

Grevillea excelsior was initially confused with a similar species G. eriostachya and sometimes their ranges overlap, but that species seldom exceeds 3 metres (10’) in height and the flowers are usually green and yellow. It is however very widespread and mostly found north of Perth, along the coast to near Broome and inland to central Australia. It is also found in SA and the NT.

The more local Grevillea excelsior (depending on suitable weather conditions) flowers anytime from August to November by producing very colourful toothbrush shaped flowering racemes to 15 cm (6”) in length. The grey/green subpinnatisect foliage is long and slender with lobes to 20 cm (8”) that are only 1.5 mm (less than 1/8”) wide. The lobes are often of different length and not necessarily formed in pairs.

Posted by William Archer at 5:42 PM