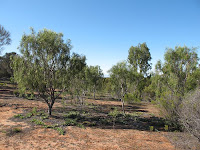 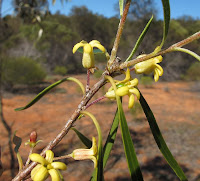 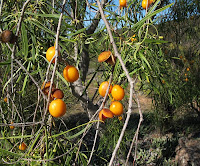 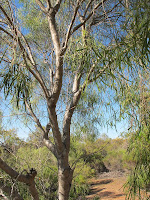 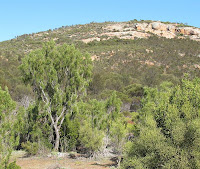 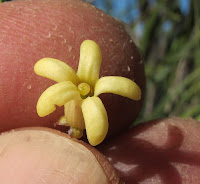 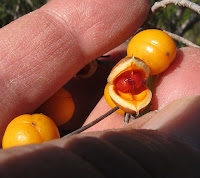 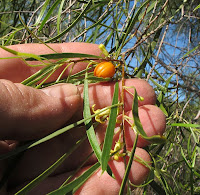 
Pittosporum angustifolium is also known as the Native Apricot or Cattlebush and belongs to the family Pittosporaceae that contains a number of interesting shrubs like Bursaria, plus colourful climbing plants like Sollya, Billardiera and Marianthus, many of which are only found in Western Australia. P. angustifolium was known as P. phylliraeoides, but this species now only refers to a WA coastal species between Geraldton and Karratha.

The weeping Pittosporum angustifolium is widespread inland, although in WA mainly south of Wiluna, but extends across the Nullarbor into SA, Victoria, NSW, Qld and the NT. It is not officially recorded for the Esperance region, although it can be found growing in sand/clay loams, particularly over weathered granite between Peak Charles (NNW of Esperance) and Mt Buraminya, 180 km or 110 miles to the ESE. The above were photographed 2-3 km SE of Peak Charles.

Growing to 8 metres (26’) in height and weeping almost to the ground, it is a very handsome tree even when not in flower or fruit.  The flowers are a small creamy yellow and will bloom anytime from June to October, but the main attraction is the bright (1-2 cm or ½”) orange fruits, which contrast against the fine green foliage. These fruits (depending on seasonal conditions) appear anytime between September and March. The fruits spit in two, thereby releasing a couple of seeds, which are commonly eaten and spread about by birds. Although the fruits look sweet and edible, their taste is not palatable to most who have tried them, although stock readily consume the foliage.

Posted by William Archer at 1:16 AM