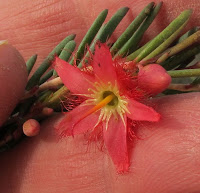 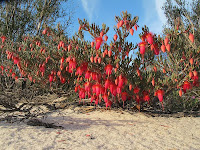 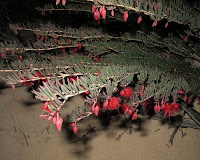 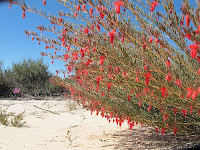 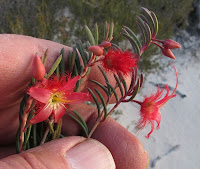 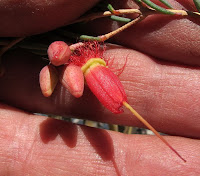 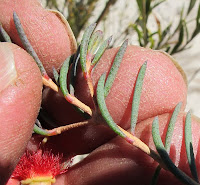 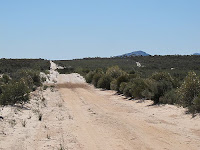 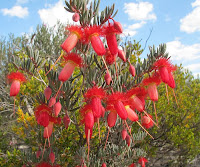 
This impressive looking shrub of around ½ metre (20”) in height x over 2 metres (6’6”) in width is found in the far NW of my survey area, with the above being encountered 115 km (70 miles) NW of Esperance, on the south side of a mostly dry creek that drains the upper Lort River catchment and near the intersection with the 4WD section of Fields Road, Here it is quite common, although localised on a sandy rise, which probably represents its most south-easterly distribution. The habitat shot above shows the rise and Peak Eleanora.

Verticordia mitchelliana has two subspecies, with the above occurring locally in mallee heath and extends westerly to about half way to Perth. The other subspecies (subsp. mitchelliana) is less common and found SE of Morawa (300 km or 190 miles north of Perth).

The soft silvery foliage stands upright, whilst the flowers are pendulous. The slightly inclined stems spread outwards and their tips are usually less than 30 cm (12”) from the ground, which I presume is to permit honeyeating birds to stand or hover, in order to feed from the hanging flowers. Above these spreading branches there are often other parallel branches with roughly a 10 cm gap between, permitting birds to stand on the lower branch to reach these flowers.

The smooth looking flower buds, are actually a couple of smooth deciduous bracteoles that completely cover and protect the highly divided inner sepals. The lobes of the sepals are fringed with long hairs that are bent back 180 degrees to produce that tangled mass of scarlet hairs, which probably deters crawling insects. The outside of the petals are covered in short hairs, except for their tips that are divided into longer ones; inside, the petals are hairless. The inner yellow projections are short stamens that alternate with longer staminodes. The long mostly straight style compliments the common name of Rapier Featherflower.

Leaves are around 1.5 cm (5/8”) in length and the flowers 2 cm (3/4”) in diameter, which hang from similar length peduncles (stalks). Flowering is recorded from August to December.