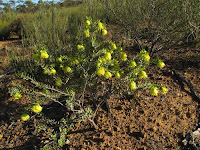 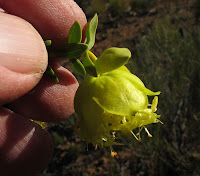 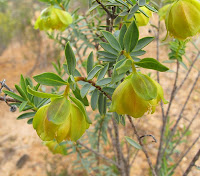 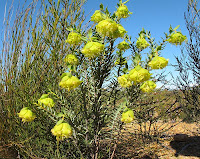 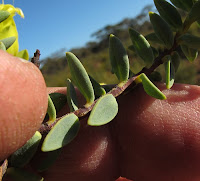 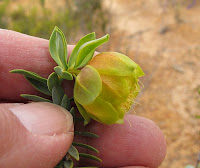 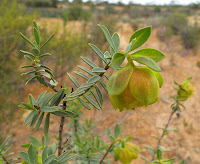 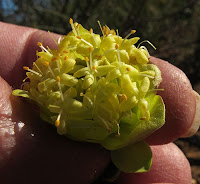 There are many ornamental Pimeleas that are also known as Rice Flowers, and of which Pimelea aeruginosa is one of them with its neat blue/green foliage and large pendant yellow flower clusters. Recorded growing to 11/2 metres (5’) in height, locally it is more common about half that size and can be found after bushfires or soil disturbance NW of Esperance, usually on gravel soils.

Pimelea aeruginosa is mostly an inland species, occurring from west of Kalgoorlie to the Geraldton region, then SE to Esperance. The individual hairless flowers are slender tubular and individually are not particularly ornamental, but are clustered within 2-3 cm (1”) diameter yellow bracts, which go on to develop an orange blush as the internal flowers progress to seed.

This species is not found east of Esperance, although a similar looking species Pimelea pendens that has sparkling white flowers does. The flowering of P. aeruginosa is recorded from May to October, but locally July would be the more usual starting period.