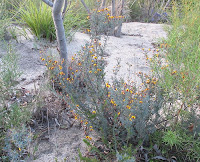 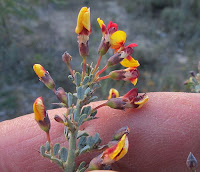 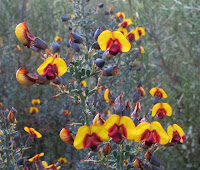 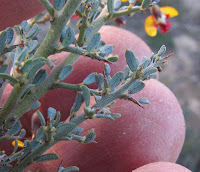 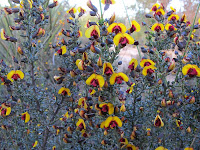 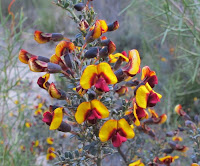 In Western Australia the genus Bossiaea is now (due to a newly adopted classification system) been placed into the Fabaceae family, but may still be contained in Papilionaceae or Leguminodae elsewhere. Bossiaeas are widely distributed in Australia particularly in southern parts, with WA having around 45 species (38 described), which is considerably more than the rest of the country. The WA ones were reviewed in 2006 by Dr. J. H. Ross who described 14 new species of which Bossiaea barbarae is one. It is named after Barbara Archer who is a substantial botanical collector from Norseman (200 km or 125 miles north of Esperance).

Bossiaea barbarae has been found from Esperance to Norseman, plus NW of Hyden, whilst the plants above were encountered at the intersection of Rockhole Road and the Oldfield River, which is centrally sited between these groupings. It is not a threatened species, but like many pea-flowers it appreciates periodic bushfires to reduce larger vegetation and stimulate seed germination, otherwise it will temporally disappear and therefore cannot be recorded. It grows in sandy loams around saltlakes and in this case above a brackish river, which seems to indicate a liking for mild saline conditions.

This species spreads from a central root system to periodically produce vertical stems of around ½ metre (18”) in height. It is quite prickly by having numerous small side-branches that end in a sharp point, these generally have small blue/green leaves each side and appear to be pinnate, but there is no specific arrangement. Nevertheless the leaves are an important identification feature, by being flat (no recurved edges) and having a pronounced central rib on the underside. Also as already mentioned, they are glaucous (blue/green).

The flowers although not especially large (less than 1 cm or 3/8” diameter) are numerous and colourful, thereby providing a pleasing display from August to October.

Posted by William Archer at 4:28 PM