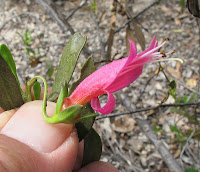 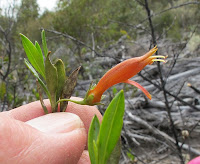 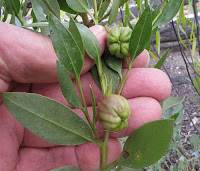 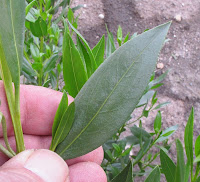 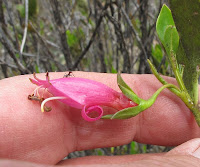 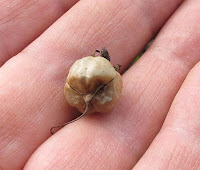 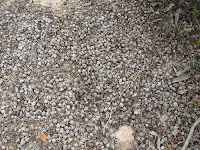 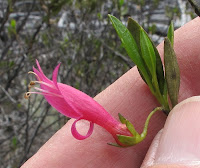 
Due to the adoption of a new classification system in Western Australia the Eremophila genus has been transferred to the Scrophulariaceae family. Myoporaceae, the family where it and other genera had been located is officially no longer recognised here, although genera and species names remain the same.

Eremophila denticulata subsp. trisulcata is a very attractive species that has only been found to the NE of Esperance (east of Mt. Buraminya) in dry mallee country, which is typified by shallow fine sand and clay loam over limestone. There are a couple of colonies close together, plus another 3-4 km to the NE. However I suspect this species is more widespread, but the area has not been burnt for several decades, resulting in the mature mallee dominating the moisture from limited rainfall, which forces the demise of most lower story species. Currently this species is classified and gazetted as Threatened Rare Flora.

After a bushfire when the eucalypts are either killed or forced to regrow from their rootstock, a dramatic change in the vegetation takes place, where many species not seen before will germinate and flourish for a few years before again being smothered by larger developing vegetation. An area alongside the track where this Eremophila grows was as a firebreak measure, chained and burnt a couple of years ago and has encouraged a considerable increase in the germination of this Eremophila, which has probably doubled the known population.

There is another subspecies called Eremophila denticulata subsp. denticulata, but this is only known from the Ravensthorpe district around 200 km (125 miles) west of Esperance and outside my flora zone. However some years ago I did find a single shrub growing in coarse sand in the Oldfield River, which just enters the Esperance region and I shall take photographs if I encounter it again.

Eremophila denticulata subsp. trisulcata grows to around 2 metres in height and besides the large green leaves, has impressive brightly coloured flowers that initially are often orange, but change to lipstick pink or red. These are close to 3 cm (1”) in length and supported on a long curved pedicel (stalk); when pollinated by honeyeating birds, they produce rounded fruit depressed at the apex (the other subspecies does not, plus its leaf edges have more pronounced teeth).

Fruits are produced in some number and probably would have been eaten and distributed by Emus via their droppings, but as bushfires have not occurred in recent years, therefore neither have the other edible plants they need, so they are less common now and the seed just falls to the ground. Flowering time is highly variable and dependent on local rainfall, but will bloom if an early wet autumn or more commonly during spring.

Posted by William Archer at 7:22 PM