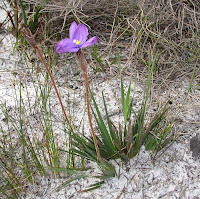 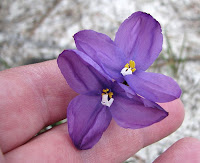 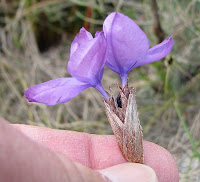 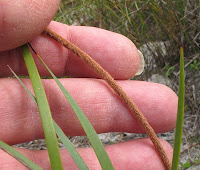 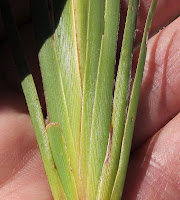 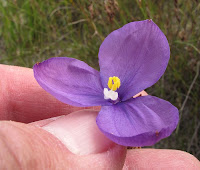 
The genus Patersonia belongs to the Iris Family ‘ Iridaceae’ and are generally known as Native Irises. They are mostly less than a metre (3’) in height and have 3 large petals and rush-like foliage. Usually these plants are moisture loving and commonly found in low-lying areas that periodically flood, but there are exceptions to this rule and Patersonia lanata is one of these, by growing on hillsides often in deep non-calcareous sand, but will also tolerate well drained gravel/clay soils.

This species can be encountered in near coastal environments from Israelite Bay (east of Esperance) to the Albany region. However, despite being quite common throughout its range, it seldom occurs in large colonies, but in suitable habitat as small groups and well-spaced individuals. There are two forms of Patersonia lanata and both are found in the Esperance region although this form is by far the most common. They differ by forma lanata having brown matted hairs on the lower leaf margins, the flower stem and below the flowers. The other called Patersonia lanata forma calvata, is without hairs on the lower leaf margins and lacks the matted hairs elsewhere.

Patersonia lanata forma lanata is a tufted plant, growing to 50 cm (20”) in height, one or two flowers develop on top of a naked stem (scape), with each producing a single bloom (sometimes together) that only last for a day. However, many flowers are produced over time, often on successive days (rarely on very cloudy or rainy days) so they can bloom for many weeks, particularly when there are several scapes.

The 3 cm (11/4”) diameter flowers are normally purple or blue, or very rarely white. On bright sunny days these plants will bloom between August and November, but better displays occur for a few years following bushfires or soil disturbance, which seems to invigorate them. Plants otherwise begin to slowly die back and although still alive, may not flower at all, although will following the next bushfire.

Posted by William Archer at 3:20 PM