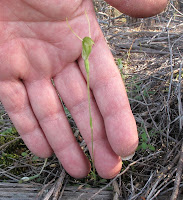 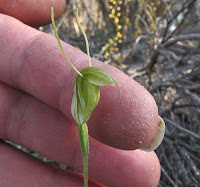 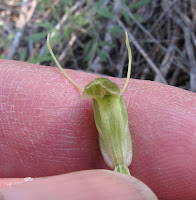 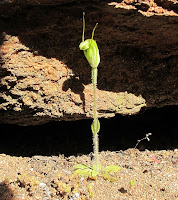 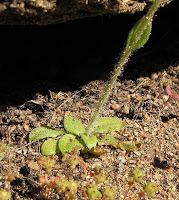 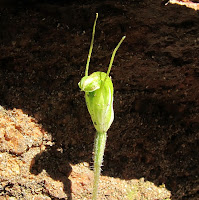 This species is detailed in the authoritative ‘Orchids of Western Australia’ by A Brown, P Dundas, K Dixon and S Hopper and apparently apart from Mt Augustus, occurs between Cue and Balladonia. The orchids above were photographed at a large rocky outcrop shown on some maps as Mt Newmont, which is 150 km (93 miles) NE of Esperance and 85 km (53 miles) SW of Balladonia, so a small range extension.

Two colonies were seen, one on the low-lying outer granite apron, growing in a sandy loam over granite and under tall shading shrubs, whilst the other (with longer stem hairs), was facing northeast on the upper rocky slopes, so more exposed to sunlight. They grew to 15 cm (6”) in height and were openly spaced within their colony. The flowers (excluding the long vertical sepals) were around 1.5 cm (3/4”) in depth.

Flowering is recorded from June to September, which also agrees with my observations.