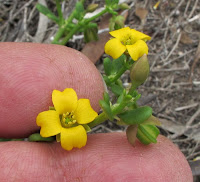 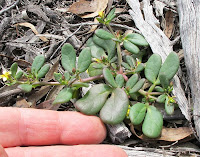 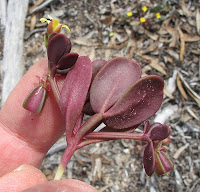 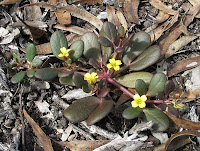 The Zygophyllum genus belongs to the Zygophyllaceae family and is so named due to the leaf's two large leaflets. These plants are characterised by the leaf shape and stamens (winged or not at their base), plus the fleshy seed capsules, which fortunately for identification purposes develop very quickly. These can usually be found on most plants and although quite large, are because of their color not always obvious and frequently require close inspection to locate.

Apart from the yellow flowers, the entire plant of Zygophyllum glaucum is fleshy indicating an ability to withstand prolonged dry periods, therefore tending to grow inland especially in dry limestone and/or saline environments. This species is recorded from all mainland States and in Western Australia from sparse scattered populations, mainly surrounded by Hopetoun, Wagin, Southern Cross, Kalgoorlie, the Nullarbor and the coast. The above were encountered in shallow fine sand/limestone/gypsum soil over marine limestone in mallee country, around 140 km (90 miles) NE of Esperance.

Young plants initially have large bronze coloured foliage, but as the plants mature the leaves reduce in size and change to green. Depending on environmental conditions (which are as likely to be too much rain as too little), plants can be annual or perennial that will influence their ultimate size. Growth is usually low and spreading, locally varying from semi-prostrate to 50 cm in height, although they are known to grow 30 cm (12”) higher in other regions. Flowers are a bright yellow and flower continually from August to November.