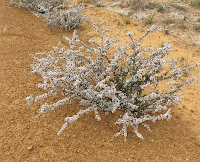 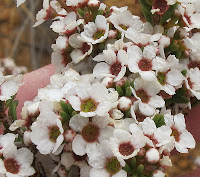 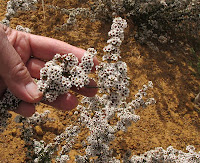 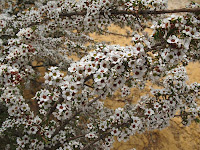 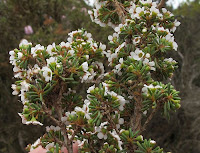 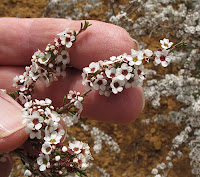 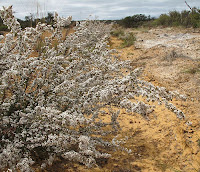 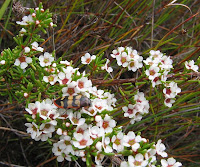 
In recent years there has been a great deal of study of the Myrtaceae family, whereby many new genera have been created, or previously disregarded ones resurrected. The genus Tetrapora is one of the latter; of which there are currently two species recognised for Western Australia and like a number of such Myrtaceae reclassification is heavily based on anther structure. This species was previously known as Baeckea corynophylla, but the anthers differ from Baeckea by being globular and black when mature. Also the style is inserted within a cylindrical shaped depression.

This species occurs mainly east of Albany to Munglinup (100 km or 60 miles west of Esperance), with a collection recorded NE of Esperance where I encountered it. Gravel/clay type soils appear to be the favoured habitat, sometimes with a shallow sandy overlay. Like many plants in these heathland environments, they do not draw much attention to themselves when not in flower, but once in bloom demand attention with flowers being so numerous they almost cover the entire shrub including the foliage.

Tetrapora verrucosa grows to around a metre (3’) in height, but produces arching branches that can spread to twice that size. The flowers are only about 5 mm (less than ¼”) diameter, but extremely plentiful, plus the pure white petals are visually enhanced by green to purple centres. Flowering time is recorded from August to May, but October to January would locally be more usual, other times would probably relate to non-typical weather conditions.