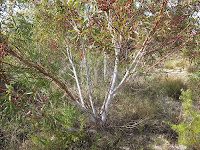 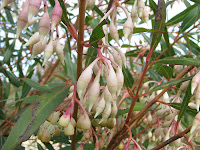 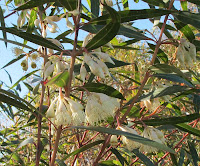 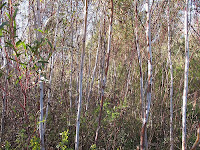 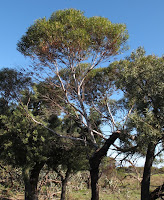 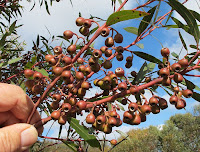 
Eucalyptus doratoxylon is an interesting species for a number of reasons, one being after fire it sprouts several reasonably straight slender trunks to 3-4 metres (10’-12’) in length from an underground lignotuber. This feature plus it being a hard timber are excellent for aboriginal spear manufacture and although some may not be 100% straight, any slight bend could be heated over a fire (without burning) then straightened out. The tips were pointed and charred over an open fire to make them even harder and if when thrown they missed their mark, any damaged point could simply be sharpened with a chert flake (mustard coloured glass-like silica found in seepage and flood zones). These flakes were commonly discarded on hill and dune tops after repairs were made.

The Spearwood Mallee is largely restricted to coastal and near coastal districts to the east of Esperance and also to the west of Albany. It is usually associated with granite outcrops where commonly found in sandy soils along drainage lines. The multiple trunks of young trees are an attractive powdery white, but as the plant matures one or two take over and develop a rough flaky bark at their base, whilst upper branches remain smooth and white. Surprisingly, the adult trees that grow to 6 metre (20’) in height, are often very bent and twisted and quite unlike when they were young.

Another interesting feature of Eucalyptus doratoxylon is its opposite leaves that are retained even when mature, whereas with most other species only the juvenile foliage have opposite leaves and these usually change to alternate within the first year. The pendulous floral parts are quite ornamental with the white flowers initially covered by delicate pixie cap operculums, to then mature into eye-catching red cherry-like fruits. Flowering is highly variable and blossom may be found on trees at almost any time of the year.