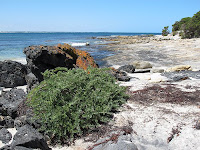 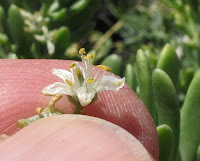 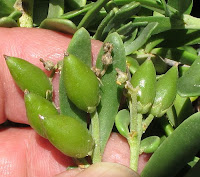 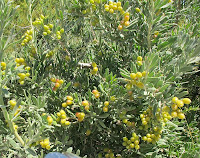 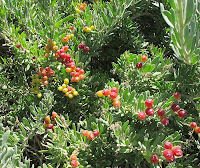 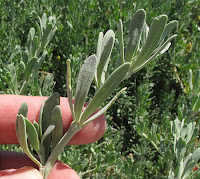 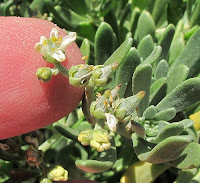 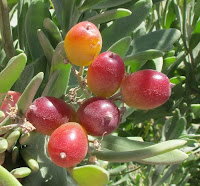 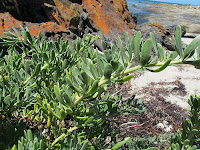 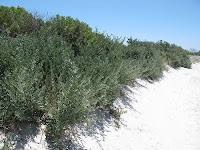 
Nitraria billardierei (previously known as Nitraria schoberi) is a widespread Australian species occurring in all mainland States, although may have been introduced to Queensland. It favours hot saline conditions and is consequently found around dry coastal regions and inland areas also with saline environments. In WA it is mainly encountered around the coast (often on the beach) from Exmouth (over 1,000 km or 620 miles north of Perth) to the Nullarbor (WA and SA boarder), with odd collections as far inland as Kalgoorlie. However as various birds spread the seed, colonies are probably more widespread particularly in remote areas.

Nitrariaceae is the Nitre Bush’s family, which in Australia has a single genus with a single species, although different ones exist in other countries. Nitraria billardierei is also called the Native Grape as the fruits are of similar size and appearance to table grapes, plus they are regarded as a Bush Tucker food and were commonly eaten by aborigines prior to European settlement. There are records of aboriginals on hot days, lying in the shade of a Nitre Bush and leisurely consuming all of the abundant fruit. The fruit is sweet, soft and fleshy with a single stone, the only drawback being a salty edge not popular with tastes of today, but in waterless regions where this plant commonly grows it would have been most welcome and quite refreshing.

In Western Australia we are fortunate not to have the introduced bird pests so common in the eastern States; a reason for this is the large waterless Nullarbor Plain these birds cannot cross unaided, however at least one bird (Starling) sometimes do so by feeding on Nitre Bush fruits. I might add, any birds that do succeed in this lengthy journey are quickly trapped to stop any possibility of them breeding here.

The Nitre Bush is quite a bushy shrub and usually found in small scattered colonies, growing to over 2 metres (7’) in height (although shorter in exposed situations), but can spread via arching branches to over 4 metres. The leaves locally are unarmed, fleshy and easy to handle, but spiny forms do occur elsewhere. The fruits are initially green, but age to yellow and/or red when mature. The flowers are small, white, with hooded petals that bloom from July to December; the fruits mature around December and continue through summer.