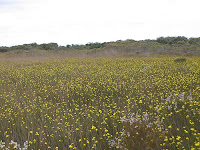 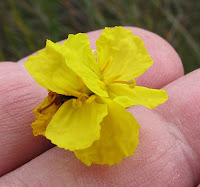 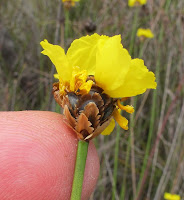 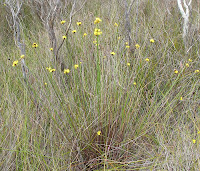 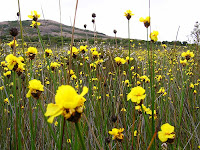 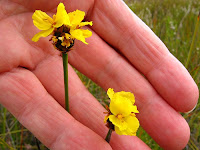 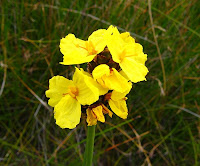 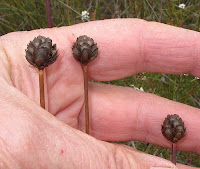 
The Xyris genus is contained within the worldwide (mainly tropical) Xyridaceae family of which Western Australia currently has 17 species and the Esperance region two. They are commonly known as Yelloweyed Grasses, although they are not closely related to the grasses. Generally these are marsh plants, preferring wet or boggy conditions, which in WA are largely confined to the SW and NE part of the State. Around Esperance both species are restricted to near coastal non-calcareous regions east of the township.

Xyris lacera grows to 1.5 metres (5’) in height, although frequently only around 1 metre. It is nearly always found in shallow (to 20 cm or 8” deep) semi-permanent freshwater swamps, which may dry during autumn but quickly fill again after rain. With this species, the leaves are rounded in cross-section and similar to the tall flowering stems, although only about a third their length.

The other local species (X. flexifolia) grows to half the height of Xyris lacera, plus the leaves are more flattened and combined with the flowering stem, often twisted. The flower heads of this smaller species are usually longer than wide, whereas the taller species (X. lacera) are more globular.

The sparkling yellow floral display happens over a considerable period, as each bract on the flower head conceals a developing flower, so bright new blooms are continually being produced from around October to March that collectively can be seen from some distance.

Posted by William Archer at 3:00 PM