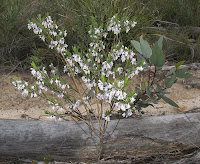 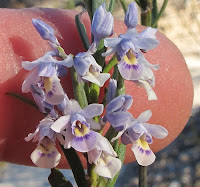 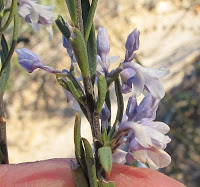 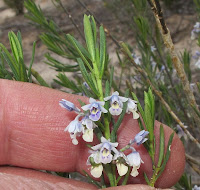 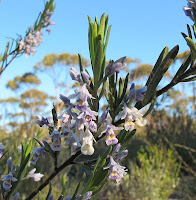 
In Western Australia the genus Hybanthus is the only native member of the Violet family (Violaceae) and contains eight species with several sub-species, of which two species and two subspecies are found in the Esperance district. Hybanthus floribundus subsp. floribundus and the other locally occurring subsp. adpressus differ most notably by their foliage, with subsp. floribundus leaves having a recurved top (uncinate), whereas subsp. adpressus leaves are straight. Although the name 'adpressus' normally refers to the leaves being pressed against the stems, with this plant they are not always distinctively so. It is known only from near coastal habitats west of Esperance.

Hybanthus floribundus subsp. floribundus is very widespread, being also found in SA, Victoria and southern NSW, whilst in WA it grows from Kalbarri to Israelite Bay and east of Kalgoorlie. However around Esperance it is not overly common and is mainly encountered inland in sandy mallee habitats. Being so widespread this subspecies is highly variable and can differ considerably, but these forms grade into each other so have not been divided further.

One WA form grows around Queen Victoria Springs in the northern Nullarbor Plain region and is recorded reaching 1.5 metres (5’) in height, but elsewhere this subspecies is usually much shorter and commonly around 60 cm (2’) high. Like many small shrubs, Hybanthus floribundus subsp. floribundus does well after bushfires when larger moisture dominating species are temporally removed, permitting this plant to rebound in moderately compact colonies.

Good sandy loams with a little clay content seem to be their favoured soil type, which in this region are often found in the vicinity of dry salt-lakes, here clay from the lakes is blown by the wind to mix with surrounding sand. Flowering is recorded from May to October, but this would be reliant on seasonal rainfall.

Posted by William Archer at 4:03 PM