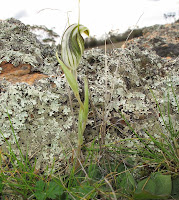 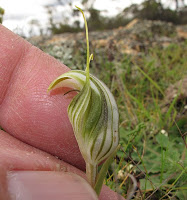 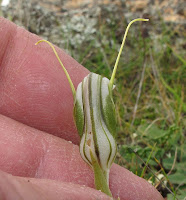 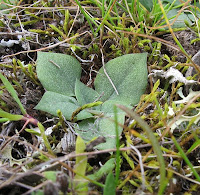 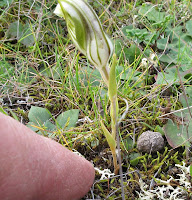 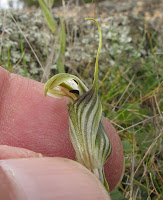 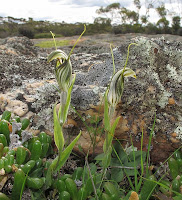 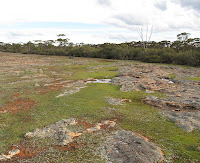 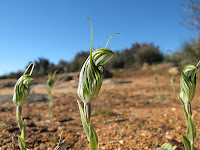 In Western Australia most greenhood orchids are referred to as Snail Orchids, however there are currently 8 species known as Shell Orchids (like this species), apparently because their flowers are much larger. Pterostylis scabra apart from the flower size (over 2 cm or 1” in depth, excluding lateral sepals), has a long curved protruding labellum, plus their basal leaf rosette is quite separate from the flowering stem.

The flowers of Pterostylis scabra can be either green or bronze coloured and due to the latter is also known as the Bronze Shell Orchid, although all the plants seen above were green. There were less than 10 flowering orchids in the above small colony, but visible leaf rosettes would more than double than number. Those above are currently the only members of this species I have encountered, as they are not recorded for the Esperance region, in fact, these orchids represent a distribution extension of around 300 km (185 miles), which certainly made me wonder if I had the right species.

Distribution of Pterostylis scabra is inland from Kalbarri to Ravensthorpe a distance of over 1,000 km (620 miles), so a further 300 km extension to the east of Ravensthorpe is feasible, particularly as extensive pristine habitat exists between. (The above were discovered on the eastern portion of Namerlonia Rock, which is 15 km east of Mt. Buraminya and 28 km NW of Mt. Ragged). Another contributing factor is the Esperance region is one or more days drive from Perth, so is not commonly visited by the WA Herbarium, especially during winter when relatively few plants are flowering and limited access tracks are often boggy and treacherous.

One of the photographs above is a habitat shot and the elongated exposed granite in the lower left is where the plants were growing. They were facing east and sheltering within 30 cm (12”) of the rock, plus their habitat acquired additional moisture from rainwater run-off and seepage. The plants were to 15 cm (6”) in height and in bloom during late July, possibly delayed as this year’s winter rainfall season has been running late. Flowering elsewhere is recorded from May to August.


Update July 2013
Two photos added of new colony of over 20 plants, approximately 100 metres from the first colony.  They were growing in a more open light seepage zone over granite.

Posted by William Archer at 6:34 PM