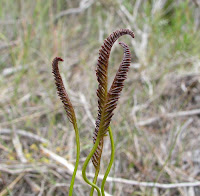 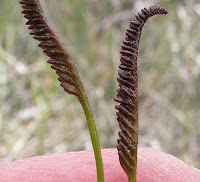 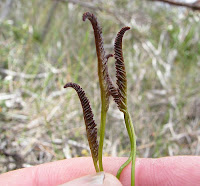 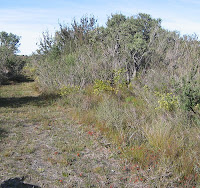 
Schizaea is a genus of unusual ferns with wiry fertile fronds and tiny paired pinnae arranged in combs at the summit. They belong to the Schizaeaceae family with several other Australian species, but Schizaea fistulosa is the only one in the Esperance district. Each of the pinnae hold two rows of sporangia (spore producing organ), so although the photos appear sparse, they contain the reproductive intricacy of the species. The vertical fertile fronds of this species (10-30 cm or to 12” in length) are undivided (forked in some species), as are the shorter infertile fronds that arise from an underground rhizome (creeping root system). The comb portion is around 2.5 cm or 1” in length, but only 2-3 mm (1/8”) wide.

The Narrow Comb Fern occurs across the southern part of Australia including WA, SA, Victoria, Tasmania and NSW, but despite being so widespread, it is rarely encountered. The comb-less, wiry, short, infertile fronds are impossible to see unless the fertile fronds with the combs are present, which in themselves are difficult to spot and mostly found by accident. If that were not difficult enough, the inconspicuous combs only appear during November and December, which means you have to be very lucky to come across them.

In WA this species is mostly near coastal and located from the north of Perth to Albany, with a couple of records in the Cape Le Grand National Park just east of Esperance. The photos above were taken in a nearby location, but there was only a single plant growing in a sandy peat seepage zone with wet heathland species. I have passed by this location at least once a week over ten or more years and have only seen it in one of those years, so perhaps the production of fertile fronds is not common or kangaroos/bushrats eat them, as the habitat has changed little.

Above a habitat shot is included, the Comb Fern was growing in the lower middle portion. Should I encounter this plant again, a more complete range of photographs will be taken.