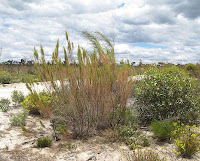 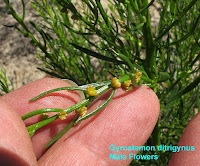 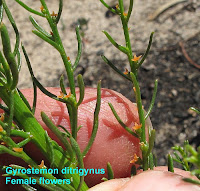 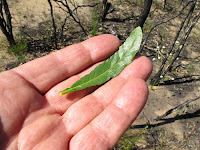 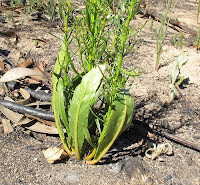 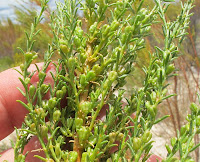 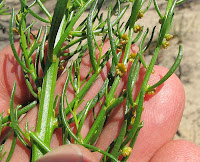 
Gyrostemon is part of the Gyrostemonaceae family that in Western Australia has 5 genera, of which Codonocarpus would be the best known by C. cotinifolius the Native Poplar. Locally, Gyrostemon has 11 described species and several undescribed and due the arrangement of male flowers are sometimes referred to as Wheel Fruits. Many of these plants have unusual growth habits and are only found in remote locations, therefore it is not surprising they are generally poorly known. For instance this species G. ditrigynus has a Priority Four conservation status, which means the species is not currently threatened, but is regarded as rare. However when conditions are right, this plant literally occurs in their millions and is far from being rare.

Gyrostemon ditrigynus as with other local species in this genus are colonising plants and if there is a bushfire or soil disturbance will germinate as if in a seedling box. However, they grow rapidly, but are very short-lived, leaving no trace after only 4 years and commonly even less. This species even in a low rainfall zone, will grow to 11/2 metres (5’) in the first growing season, plus flower prolifically. The second year it can reach 3 metres, but signs of decline like the loss of lower foliage is already evident, with the third year they are beginning to die-off and are all gone by the fourth and do not germinate again until another fire passes through.

These plants have male and female flowers on different shrubs and are cross-pollinated by the wind. Species that require this method of reproduction commonly develop very quickly after their habitat has been demolished to take advantage of the lack of other plants, which might block the pollen spread. For the same reason, it is likely why they grow so fast and are short-lived, for after a few years other large growing species would be moving into their air-space to make pollen movement by this means inefficient.

When Gyrostemon ditrigynus germinates they produce several large flat leaves to form a basal rosette, but these quickly die and disappear as the stem develops. The stem and foliage is a deep green and quite viscid (sticky) to give off a musky odour. They begin to flower by November, but depending on seasonal rainfall and plant age, this period can be earlier of later, so flowers can be found anytime before the arrival of hot summer weather.

Generally this species favours sandy or clay loams over limestone, or the lower slopes of sandy rises, commonly under a burnt and denuded eucalypt upper story, however Gyrostemon ditrigynus is highly adaptable and very widespread, occurring in a variety of habitats and forming extensive colonies. It has been recorded from NE of Hyden (270 km or 170 miles west of Norseman) to Mt Ragged (220 km or 135 miles SE of Norseman). Norseman is 185 km (115 miles) north of Esperance. This region except for a strip of farming land north of Esperance in very remote with few tracks, which is probably why so little is known about this species.