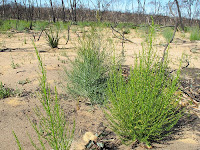 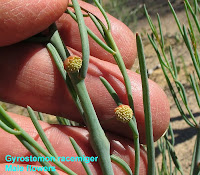 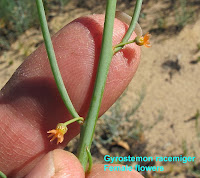 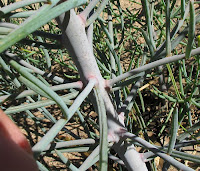 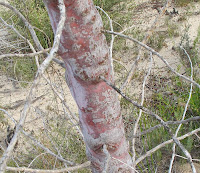 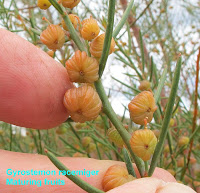 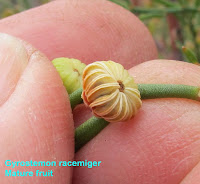 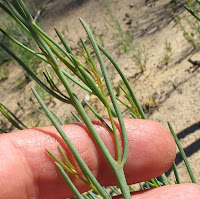 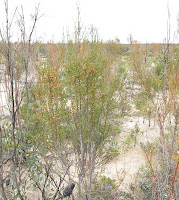 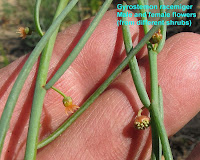 This species although largely restricted to remote regions, is reasonably well known probably because of its wide distribution from south of Carnarvon to the northern Nullarbor Plain (ENE of Kalgoorlie) and down to the NE of Esperance, then directly across to the north of Perth. Around Esperance it is found in the mallee region where rainfall is lower and summer temperatures higher than closer to the coast. It favours deep sandy soil, but is only found after bushfires and then for no more than four years, however growth is extremely rapid with some plants reaching 4 metres (around 12’) with a sizeable tree-like trunk.

Apart from different habitat requirements, this species is commonly found growing near and sometimes marginally overlapping with another rapid growing Gyrostemon, G. ditrigynus (see here), but that species prefers heavier soils, particularly over limestone. A photo above shows this overlap, with G. ditrigynus growing immediately in front and behind the photographer, with Gyrostemon racemiger colonies further in front of the camera. Even at a distance, they are easy to separate, as G. ditrigynus has deep green foliage, whilst G. racemiger is a powdery grey/green and has much longer leaves.

Gyrostemon racemiger is also noticeably different with the color of the trunk and branches that are an attractive powdery pink. In the Esperance region this species is quite common, but nowhere near as common as the less widely distributed G. ditrigynus, which is currently (incorrectly) listed as rare. Officially, G. racemiger is recorded flowering between August and September, which may be the case in the northern regions, but around Esperance this is usually much later and often extending into December providing conditions are not extreme.