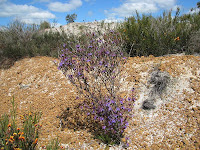 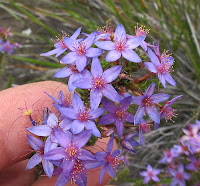 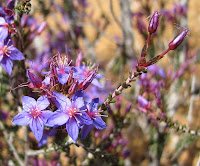 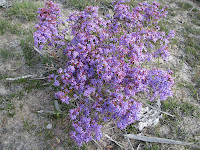 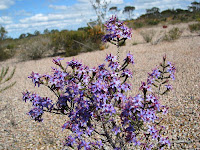 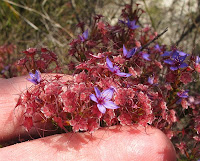 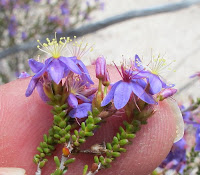 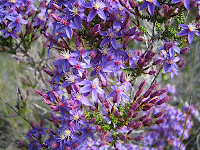 
The genus Calytrix belongs to the huge Myrtaceae family, but is easily separated from other genera by the long hair-like calyx awns that are ornamental in their own right. However it is the brightly coloured starlike flowers that immediately catch the eye, which with this species are blue, violet, pink or purple, combined with prominent yellow (fading to red) stamens. This is a common WA species, occurring mostly in non-forested (heath) areas south of a line from Kalbarri to Israelite Bay.

Calytrix leschenaultii was once known as a variety of Calytrix brachyphylla, but this species is no longer recognised. In the Esperance region C. leschenaultii can usually be found in small scattered colonies, growing in non-calcareous sand or gravel from the coast to the mallee, but are easily located in habitat due to their striking color display. However when not in bloom, their small leaves to 2 mm (less than 1/8”) permit the shrub to vanish into surrounding vegetation.

This species can grow to a metre (little over 3’) in height, but is commonly closer to 60 cm (2’). Several 1 cm (3/8”) diameter flowers are produced at the summit of each branchlet to often obscure the foliage; the calyx awns extend the floral parts a further 1 cm to 2 cm diameter. Calytrix leschenaultii is known to bloom (throughout its range) from June to November, but locally August to November would be the norm, although the long lasting reddish calyx and awns can prolong this period.