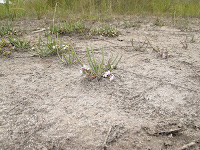 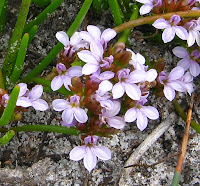 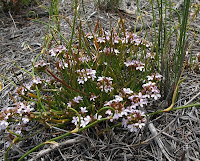 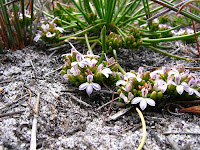 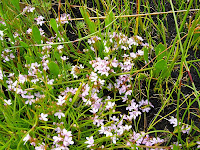 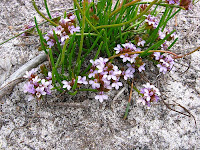 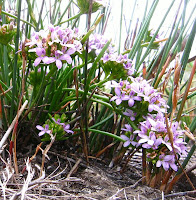 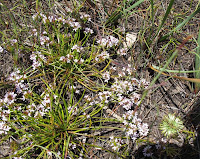 
Anthotium is a small genus in the large Goodeniaceae family and of which only one species is known to exist in the Esperance region. This species Anthotium humile, occurs from Augusta-Margaret River to Cape Arid (east of Esperance) and is commonly encountered in low-lying sand/peat areas around swamps, flood plains and seepage zones. Like many plants in this family they do well immediately after bushfires when competing plants have been destroyed to provide an open and ash fertilised habitat, which these fast growing herbaceous species speedily exploit.

This Anthotium, also known as the Dwarf Anthotium is a perennial, but behaves like an annual by dying back to the rootstock in autumn to then reappear the following spring. The simple linear leaves are round and fleshy and originate from a central rootsystem; the flowering stems are similar but produce large clusters of flowers at their apex. These can be white, through various hues of pink and purple, although locally a purple/pink form is the most common. Plants seen inland (Mt. Burdett) are more upright with white flowers.

Although Anthotium humile can be to 20 cm (8”) in height, around Esperance it is usually spreading to 30 cm (12”) diameter, with arching stems or completely prostrate apart from a few central tufted leaves. It is long flowering and if curtailed by a prolonged dry period, will recommence with the advent of rain, however it is recorded in bloom from October to March and locally plants will continually do so under favourable conditions. Pollination is via insects.