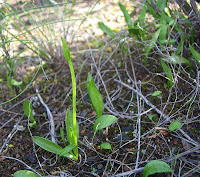 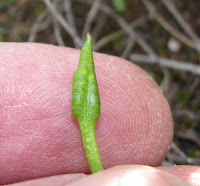 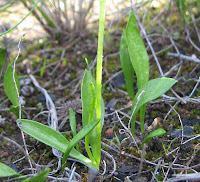 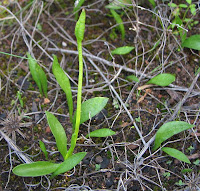 
The Adders Tongue is another Fern Ally and is represented in Western Australia by a single species Ophioglossum lusitanicum, although there are several in the Eastern States. These are housed in the Ophioglossaceae family that also includes the interesting genera Botrychium and Helminthostachys, of which the former does not occur in WA and the latter only in the far north above Broome, so neither are found in the Esperance district.

These plants have sporangia (individual structures that produce spores) that open horizontally and in Ophioglossum, are sessile (without stalks) and produced in two rows at the summit of a fertile frond (technically a frond, although looking like a stalk). Ophioglossum lusitanicum is by far the most widespread species being found in all States including Tasmania, but is mostly overlooked as they are ephemeral plants arising from a small tuber-like root.

Ophioglossum lusitanicum is more commonly encountered as small leaves (infertile fronds) in concentrated colonies, but with few or no fertile fronds, making identification uncertain. I have noticed they are stimulated by bushfires, which clears intruding vegetation and also fertilises the ground with the ash. They only produce fertile fronds during cool moist conditions, which locally can be anytime between May and September, but it means observers need to be there at the right time. This is probably why collections in WA are so sparse and widespread (extending far inland) and locally with only a single record to the NE of Esperance. However they are not uncommon, although colonies tend to be restricted to small areas.

Generally these plants can be found on or near low-lying granite outcrops, growing in loamy soils over granite and often with light seepage keeping the environment moist. The fertile fronds are usually around 10 cm (4”) in height and plants prefer open environments, but may also occur close to slow growing tall shrubs that provide a sheltered, but open habitat at ground level.