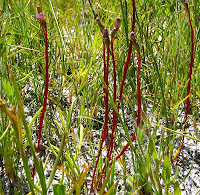 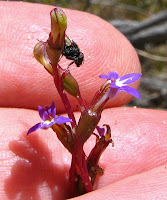 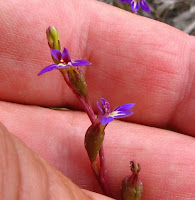 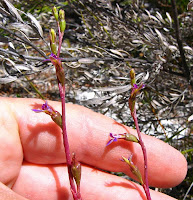 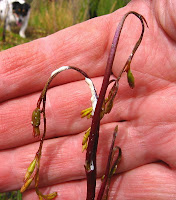 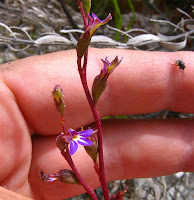 
This Lobelia is an undescribed annual species with affinity to Lobelia gibbosa and is currently lumped with it, but they have no ability to reproduce, despite in this instance growing within a kilometre of each other, simply because they flower at different times of the year. This species blooms in November and December, but locally L. gibbosa flowers from January to April.

Apart from the flowering time discrepancies, they differ considerably in appearance, with Lobelia sp. aff. gibbosa having smaller flowers that are purple (not blue) and a slender (not stout) stem, which is also purple (not a pale straw brown). Habitat is also very different with Lobelia sp. aff. gibbosa being only found in a low-lying area after fire, on the outer edge of a winter/wet depression, plus in shallow sand/clay loam over granite in association with Borya sp., Lobelia gibbosa does not occur in either of these habitats.

Lobelia sp. aff. gibbosa is currently only known from 4 colonies all near coastal to the east of Esperance and within a few kilometres (miles) of each other; three very small ones are on a couple of large rocky outcrops, each of less than five plants (2 colonies noted after fire). The forth and largest colony was in a moist sub-surface (not wet), sand/peat soil in a low-lying environment. Here there were around 30 plants in an area approximately 20 x 10 metres (66’ x 33’), with sedge and spaced Melaleuca sp. to 1.5 metres (5’) in height. This colony was first noted after fire (2005) and has been reducing in number ever since as taller species dominate.

An interesting observation concerns the small granite colonies of Lobelia sp. aff. gibbosa, which were found growing next to the equally rare coastal colonies of Lobelia cleistogamoides that were not seen elsewhere. This strange relationship may possibly relate to a symbiotic association of these species with soil microbes. It may also mean that like Lobelia cleistogamoides, Lobelia sp. aff. gibbosa is more common somewhere inland.

Locally, Lobelia sp. aff. gibbosa and Lobelia archeri are highly susceptible to a fungal disease (shown above) that is usually fatal. This disease strikes during high humidity after rainfall during November/December and is only curtailed by a bout of hot dry weather that kills it. Around Esperance, rain is unusual or of short duration at this time of year, so most plants escape this fate, although with climate change they could become early casualties.

Posted by William Archer at 4:18 PM