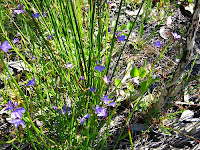 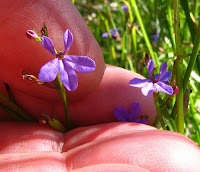 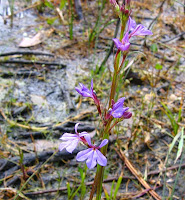 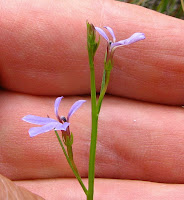 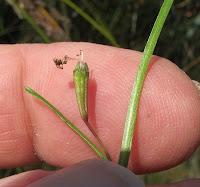 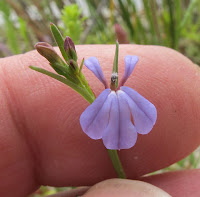 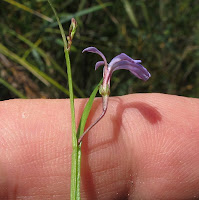 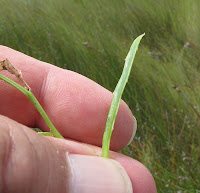 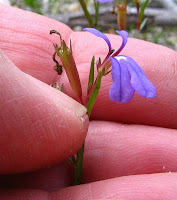 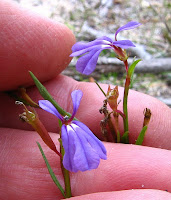 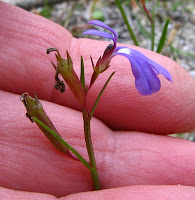 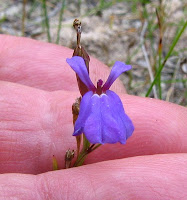 Plants from a hollow and seepage zone in deep calcareous sand


In Western Australia due to the Classification System now adopted, Lobelia anceps is regarded as belonging to the Campanulaceae family, but may be placed into Lobeliaceae elsewhere. The species name has also been known as Lobelia alata, but has now been universally changed to Lobelia anceps. This species is very widespread and in Australia occurs from Geraldton (north of Perth) around the south coast (including, SA, Victoria, Tasmania and NSW) to north of Brisbane in Queensland, where commonly found in near coastal, cool moist soils. It is also found in New Zealand, South America and South Africa.

Lobelia anceps is a low sparsely branched perennial that will ramble near the ground or lean against taller vegetation to a height of around a metre (3’). It will grow in sun or shade, but requires a moist soil in exposed situations, so is usually encountered around seepage areas, swamps, lakes, streams, etc. It mainly flowers in the warmer months (September to May), but blossom can be found anytime.

Most Lobelia spp. are very sensitive to soil type, particularly the pH by either growing in acid or alkaline conditions. Locally, Lobelia anceps grows in both soils, but when in calcareous soil has different features from the norm and is probably evolving into a different species, but to what extent it has progressed down this path and if it should be classified differently, requires further study.

The above photographs have been divided into three groups, with the top four taken from plants growing around a non-calcareous sandy/peat soil and are reasonable typical of this species.
The centre four photos are from plants that were growing in an exposed moist situation, in deep calcareous sand near a creek outlet to the sea.
The bottom four photos are from plants growing around a hollow and seepage zone in deep calcareous sand, also close to the sea, but a more sheltered position.
The three colonies above are within 14 km (8.5 miles) of each other, to the west, and south of Mt. Merivale (20 km east of Esperance).