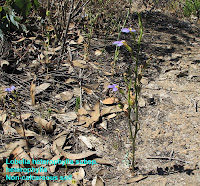 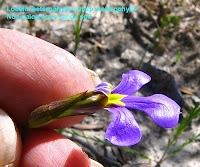 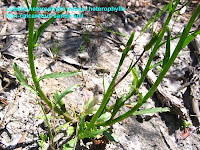 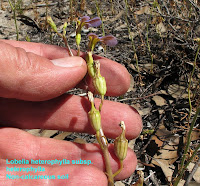 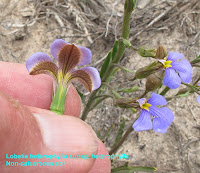 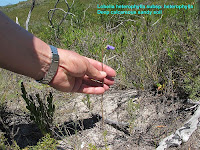 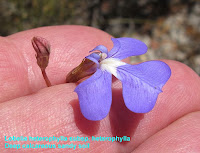 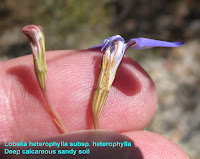 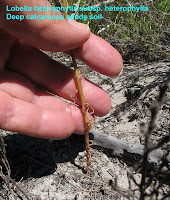 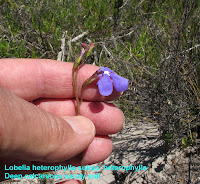 
In Western Australia with the adoption of a different classification system, the genus Lobelia has been placed into the Campanulaceae family, although it may still be listed under Lobeliaceae by other authorities. Lobelia heterophylla and other species have recently been reviewed using DNA analysis, with this species being now separated into three subspecies. However it does not affect areas roughly south of Carnarvon, as only subsp. heterophylla is located here, with the others in Central Australia and the Pilbara.

Lobelia heterophylla subsp. heterophylla is an annual and a very widespread plant, found growing in a number of habitats, from coastal dunes to inland desert regions including granite outcrops. In the Esperance region there are two distinct varieties whose DNA has been investigated and although there are notable differences, they have not been considered sufficient to warrant subspecies status. However I shall separate them here to point out some of the differences.

Basically, the two varieties can be separated by habitat preference, with one occurring in smallish colonies (100 or less plants) and favouring low-lying areas in non-calcareous soils, although sometimes occurring directly over limestone, which would retain moisture for longer periods than purely deep sand. So I would suggest there are two main factors here, non-calcareous soils and a higher moisture requirement despite being found well inland. The flowers of this variety vary from sky blue to purple, but always have a yellow throat. It often branches into multi-stems that carry far more foliage than the other variety. Although if a dry year or germinated away from a sufficient moisture supply, will be stunted, single stemmed and with limited foliage.

The other variety is very habitat specific and only occurs in deep calcareous sandy soils, on stabilised, near coastal tertiary dunes. Here they can occur in their thousands and spread over large areas after fire, but most will disappear after a only few years. They do not occur in neighbouring deep acid (non-calcareous) soils or other habitats. They mostly have a single stem, but grow to around ½ metre (20”) in height and only after high rainfall will much foliage grow near the plant’s base; mostly they have small slender leaves that quickly shrivel. The flowers are sky-blue and always have a white throat, although a few all white flowering plants have been seen. The only overlap between these varieties, is on the different pH soil boundary where the non-calcareous variety is occasionally found growing in hollows in shallow soil mixtures over limestone.

Flowering is recorded from October to December, but locally both forms are seldom seen before November and rarely flower into the New Year, so November and December would be typical for this species in the Esperance region. The common name of Wing-seeded Lobelia refers to the wing on each corner of the triangular shaped seed.

Posted by William Archer at 7:13 PM