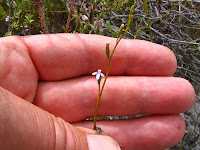 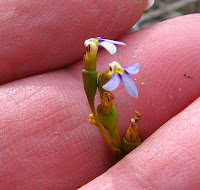 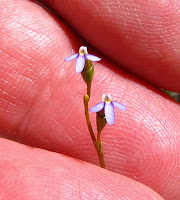 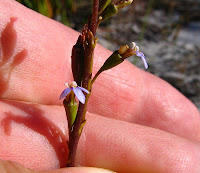 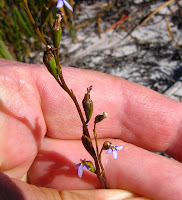 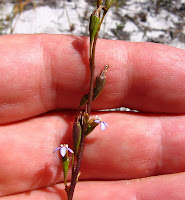 
Lobelia archeri is a recently named annual species and has amongst the smallest of Lobelia flowers. It is only known from private property and neighbouring public land south of Mt. Merivale (20 km or 12.5 miles east of Esperance). It grows on the upper slopes of tall non-calcareous sand hills, although odd plants can be found lower down after fire.

Growing to around 40 cm (16”) in height, it usually has a thin unbranched stem with several small pale blue flowers near the summit. Being such a small plant, Lobelia archeri requires open spaces to survive as it can be quickly displaced by other vegetation, therefore it benefits from the after-effects of fire that temporally reduces dense or taller vegetation. This provides space for small plants to flower and set seed, some of which is added to the soil seed-bank for future use.

The need for open spaces is I suspect the reason why this species favours the upper slopes of tall sandy hillsides, as these dry windswept positions do not encourage colonisation by many plants, particularly large ones, thereby providing an environment with gaps between vegetation for longer periods. Lobelia archeri will spread quite quickly with a regular fire routine and is probably a species that has been disadvantaged by bushfire reduction under European Fire Management (see http://natureitems.blogspot.com/2006/12/fire-management-european-verses.html for further details).

Another reason why this species prefers an open windswept environment is a fungal disease that attacks the vascular system causing collapse and death. This and other Lobelia species are particularly susceptible to this infection after rainfall in sheltered places during the latter part of the year. Lobelia archeri flowers from late November to early January.