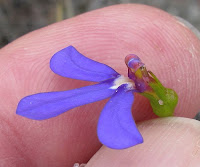 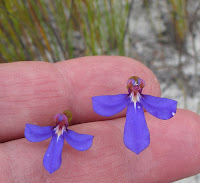 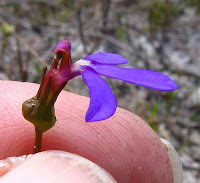 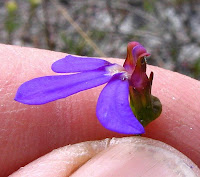 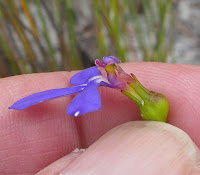 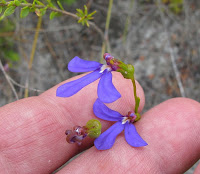 
Lobelia rarifolia is an annual herb and quite common in the Esperance region, although mostly near coastal and favouring winter-wet depressions and low-lying areas. Locally it can be encountered after fire in sandy/peat loams, or shallow sand over gravel, where they usually form scattered reasonably compact colonies of 10-100 plants, but as taller surrounding vegetation matures; colonies disappear until after the next fire.

Ranging from Cape Arid (east of Esperance) to Kalgoorlie in the north, then west to Geraldton, Lobelia rarifolia is quite widespread, but represented by limited collections, possibly because you need to be in the right place to catch them in flower. Locally this is from late October to December, although they may bloom earlier further north.

Unlike most other Lobelia spp. that have multiple flowers along the stem, Lobelia rarifolia has only a single flower at the summit, although there may be two or three minor ones branching from the upper portion of the main stem, which also produce a single flower. The stems often have scattered small linear leaves, which as its name suggest are not overly numerous, but as the 2 cm (3/4”) long flowers are an attractive deep blue, they readily draw the observers eye. Overall, plants seldom exceed 20 cm (8”) in height, but can grow taller if pressed by surrounding vegetation.

Posted by William Archer at 3:46 PM