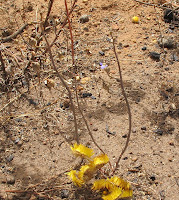 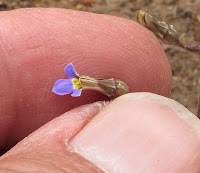 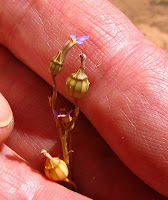 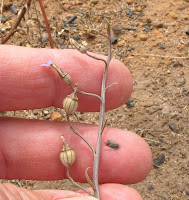 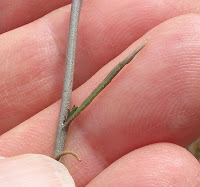 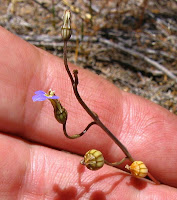 
Until the year 2007, Lobelia cleistogamoides was known only from a few herbarium specimens and called Lobelia sp. ‘small flowers.’ It is closely related to Lobelia heterophylla, but has a much smaller flower. Generally it is a slender upright and unbranched annual herb to ½ metre (18”), but when young, it will branch (mostly at the base) if damaged. New growth has narrow stem leaves to 2 cm (3/4) in length, but these shrivel during hot weather to leave only the flowers.

Although Lobelia cleistogamoides can occur near the coast, it is very much an inland species, favouring a coarse sand or gravelly loam often over granite. As such this species can be found in alluvial deposits around granite outcrops, where although localised is often very common. Like other Lobelia spp. they require open conditions to thrive, so do very well after bushfire, although these dry inland environments are rarely short of open areas, so some plants can usually be seen.

Around local near coastal granite outcrops I have encountered less than 20 plants in a handful of very small colonies, usually after fire or in shallow soil amongst a Borya sp. The reason why this species may be less common here, is possibly due to a fatal fungal disease (shown in a later post), which the higher coastal rainfall and humidity encourages.

Herbarium records have Lobelia cleistogamoides ranging from Mt. Ragged to east of Geraldton and a couple of collections from the Eyre Peninsula in SA. The mainly blue flowers (occasionally lighter or even white) have a yellow centre and are less than one centimetre (¼”) in length. They bloom between October and December, with odd flowers surviving into the New Year.