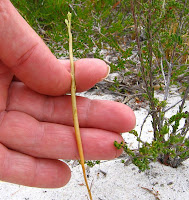 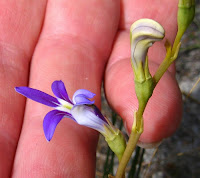 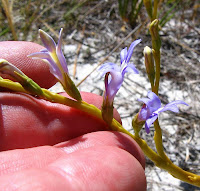 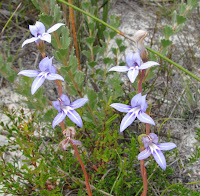 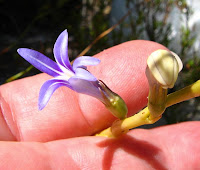 
The genus Lobelia was until recently part of the Lobeliaceae family, but in Western Australia with its adoption of a different classification system, it is now placed in Campanulaceae. Lobelia gibbosa is one of its most widespread plants, being found from Geraldton to Mt. Ragged, then across the Nullarbor to SA, Tas, Vic, NSW, Qld and the NT, so virtually Australia wide. Naturally, ranging over such a large area, variances do occur, so I shall restrict myself purely to the Esperance region.

Locally Lobelia gibbosa can be found in deep non-calcareous sand (Banksia heath), around granite outcrops (particularly coastal), plus shallow sand overlying gravel, where they can be quite common in small scattered groups. During mid-summer, these habitats are mostly very dry, but this is the only time these annual plants flower. It achieves this by germinating around October when there is usually sufficient moisture and occasional rainfall, and if unusually dry then, there will be fewer plants later on. As it develops, it takes up moisture and stores it in its bloated stem, but when it starts to flower (often-late January) the roots are almost non-functional and act mainly to anchor the plant in the soil. The plant if uprooted and provided with sunlight, will continue to grow and bloom.

The flowers are between 2-3 cm (1”) in length and due to summer temperatures that can exceed 40 degrees Centigrade (over 100 degrees F), are often the only herbaceous plants flowering. They prefer an open sunny position, so receive whatever the weather can throw at them, yet these delicate looking plants thrive in these conditions. If the habitat becomes too overgrown, Lobelia gibbosa will eventually die out or with odd ones remaining, so slashed walking tracks can be very good places to find them.

The flowers come in various shades of blue and very occasionally almost white; they mostly have a central white stripe along the three large petals. Several flowers are produced at the summit of the usually unbranched stem to 40 cm (16”) in length, which open progressively from the bottom up, so commonly bloom for a couple of months. Locally they flower from January to April, although February and March are their main period. This flowering time is important, as I shall refer to it in later Lobelia posts.