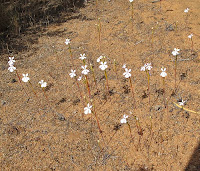 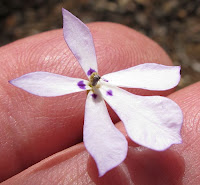 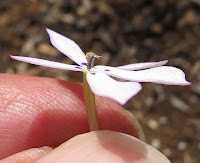 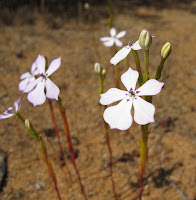 
Isotoma hypocrateriformis from the Campanulaceae family is a highly variable plant and has been known by three varieties, of which one has already been deleted and the other two are likely to be merged together, to leave only Isotoma hypocrateriformis. It is most common around the coast and near coastal areas from Albany to Kalbarri, but can be found inland and as far east as Esperance, but locally is not common.

The above was a very localised colony above the Lort River at the intersection of Cascades Road, where plants occur in a shallow red loam over granite. It may be more common, but being a relatively short-lived annual, you need to be in the right place at the right time. Also known as Woodbridge Poison, it is suspected of being toxic to stock, so it may not be welcome on grazing properties, but it is an attractive plant with large bright flowers that appear suspended above the ground.

The flowers are around 2.5 cm (1”) in length and are supported on vertical unbranched stems, which have several well-spaced short narrow upright leaves. There are no other components like basal foliage, so plants are not particularly attention grabbing when not in flower. Flowering is recorded for October and November.

Posted by William Archer at 5:31 PM