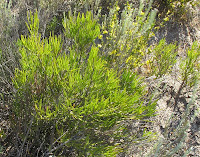 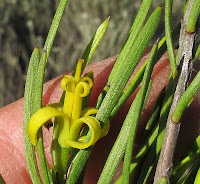 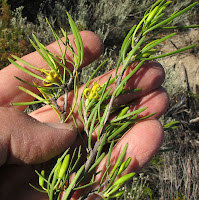 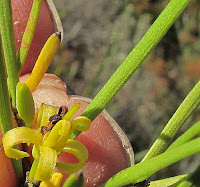 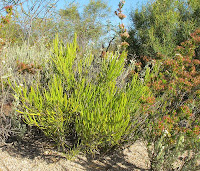 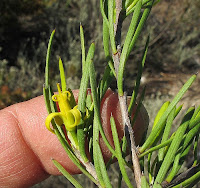 
Most people know some genera within the Proteaceae family like Banksia, Hakea, Grevillea, ets., plus the spectacular South African Protea, but except for a few keen native plant enthusiasts, the Persoonia genus is poorly known even amongst Australians despite there being close to 100 endemic species. They are tough plants usually with thick, rough to touch foliage (rarely prickly) and generally occur in scattered small colonies, which probably represents their method of seed dispersal.

Persoonia seed have a fleshy exterior, much favoured by animals particularly emus who after eating will as they move around, pass the hard internal seed via their droppings, hence colonies formed this way are often small and scattered. Seed dispersal by smaller animals possibly bushrats or the larger skinks like Bobtails, Blue-tongues and Erernias who are very fond of this type of vegetation, could result in larger Persoonia colonies. Persoonia striata plants can also give the impression of being part of a larger colony as they commonly produce aerial stems  that arise from the underground rhizome, or spreading root-system (see first photo above).

Normally, this Persoonia species would not be found in my definition of the Esperance district, but I located a colony right on the boundary where West Point Road crosses the Oldfield River, which is roughly 50 km (30 miles) east of Ravensthorpe. Here several plants grow in a coarse sandy loam, just above the river, which I might add is quite saline, although in this area is mainly sub-surface when not in flood.

Persoonia striata is a low spreading shrub of around 60 cm (2’) in height, with yellow flowers that bloom from October to December. There are other similar low growing Persoonia species that are more common in the Esperance region, but P. striata is restricted to over 100 km (60 miles) west of Esperance, plus the leaves are flat and have three distinct longitudinal ridges on both surfaces (see photos).