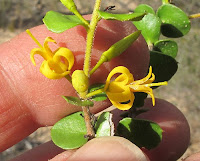 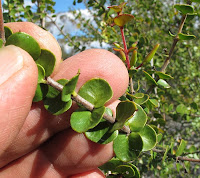 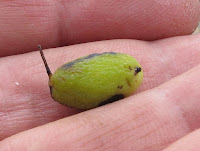 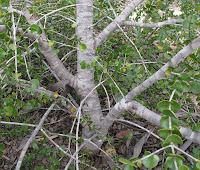 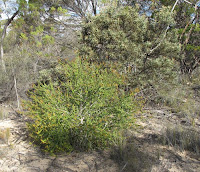 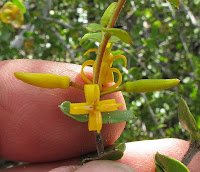 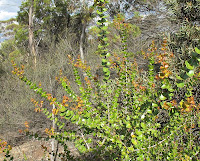 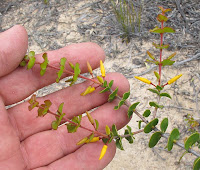 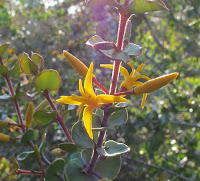 
Persoonia is a member of the large and often spectacular Proteaceae family. They are unusual within this family for producing a seed enclosed by a soft edible fleshy layer (drupe), like a cherry it is intended to encourage animals like birds and mammals to eat them, so spreading the seed via their droppings. Most other Proteaceae produce a dry capsule, which upon opening rely on the wind to disperse the seed.

There are close to 100 Persoonia species and all but two are endemic to Australia, in Western Australia there are 43 species mostly in the southern portion of the State. Persoonia cordifolia is only found in a small area approximately 130 km (80 miles) NE of Esperance. Here it grows in a deep sandy loam, which is a minor habitat in the mallee region, where typically the soils comprise a fine sand/clay over limestone. The sandy areas occur as islands, sometimes with a sandy isthmus joining a few together. In most of the mallee, these sandy patches would make up less than 10% of the total area, but in this district it is much higher to possibly over 20%.

Persoonia cordifolia is very sparsely distributed within these sandy areas, even when habitat seems suitable. The highest populated area I have encountered is around a small to medium saltlake over 40 km (25 miles) NE of Mt. Heywood, where over several kilometres only 20 odd plants were found, mostly in ones and twos, rarely more. They were to a reasonably uniform height of around 1 metre (3’), probably due to new growth after a fire, which swept through about 5 or so years ago. Interestingly, only one plant was producing flowers (the smallest), with no sign on the others.

The only other known group of Persoonia cordifolia is 8-10 km (6 miles) to the SE of the above saltlake, where there are less than 10 plants spread over 4 km (2.5 miles). Plants in this area are in much older growth vegetation and range in height between 1-3 metres (3’-10’) and most had flowers. I am reasonably familiar with this scattered group going back 20 years when I first discovered them and I am quite certain that the largest plant and its companion 50 metre/yards away are the same individuals. When originally encountered one was around 2 metres (6’-7’) in height and the other about a metre (3’). Now the taller one has grown a metre (3’) and the smaller 1/2 metre, so not exactly a fast growing species, even considering the low rainfall of the region.

There would have to be more of these plants in the district, but it is difficult country to penetrate and to my knowledge no plant, let alone new colony has been located. So due to its sparse distribution in a very localised area, slow growth and strange flowering habit, you would think it would have a high conservation status, but alas it has none, which I think must be an oversight and I hope the situation will soon be corrected as mining exploration is ongoing in this district.

According to Dr P. Weston in his paper ‘The Western Australian species of subtribe Persooniinae (Proteaceae: Persoonioideae: Persoonieae), where Persoonia cordifolia is described, he made particular mention that this ‘is a distinctive species, not resembling any others.’ Flowering is known only during December and January, but due to the large number of individuals not currently in bloom, there may be different conditions or another period that will influence when they flower.

Posted by William Archer at 6:42 PM