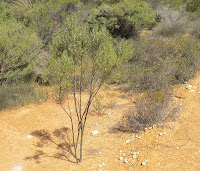 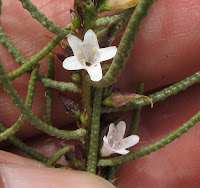 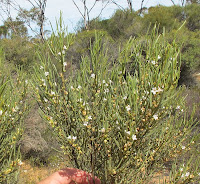 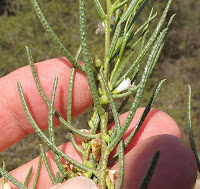 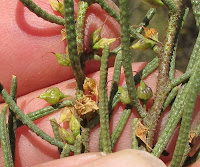 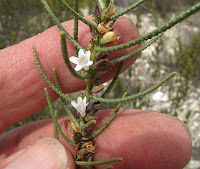 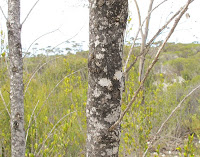 
Under the new classification system adopted by the Western Australian Herbarium, the well known family Myoporaceae that includes the large Eremophila genus, has now been absorbed into Scrophulariaceae, which is a pity if for no other reason than the former was easier to pronounce, let alone remember. This particular species has a common name of Salt Myoporum, because it is at times found near saline depressions.

Plants in the genus Myoporum tend to be more coastal than Eremophila, which is mainly found well inland. They are taxonomically separated by the shape of their opened anthers, with Myoporum being kidney shaped, whilst Eremophila more arrow like. However, in most instances the flower shape of Myoporum is regular (radially symmetrical) and Eremophila two lipped (irregular or zygomorphic).

Myoporum turbinatum is a very rare species, known only from a small area NE of Esperance generally within a couple hundred metres of small saltlakes. I know it from four very restricted colonies, but all are only a few kilometres apart and either on the disturbed edge of a limestone/gravel road, or in small roadside limestone quarries where road making material was extracted. These quarries are ripped by the bulldozers after operations to permit regrowth, which they generally do most successfully and provide excellent areas to look for wildflowers, although ephemeral species do not do as well.

In one quarry there had been several dozen Myoporum turbinatum plants to 4 metres (around 12’) in height, which had been labelled, presumably to check on their progress. Of these a number had died, but most were still hanging on, if only by a few centimetres/inches of growth at their tips, but going on their current state of health will not survive much longer. There was no germination to replenish the colony, but their seed would have fallen to the ground to await a fire or further soil disturbance.

Close to ten years ago, I found a few plants to 1.5 metres (5’) in another limestone quarry that were quite bushy, so the very leggy appearance I would suggest is due to age and periodic dry conditions. So depending on the luck of the draw, if plants germinate in a good (moist) year, with the following year also of reasonable rainfall, growth habit can be remarkably different. Three young plants, also to 1.5 metres and growing on the edge of a road were regarding growth habit, somewhere between (see photograph above). Interestingly, ten years ago Myoporum turbinatum plants were growing in the same place, although they had died possibly during road improvements, these later plants had probably grown from their seed.

The species name of turbinatum refers to the top-shaped fruits, which are produced in number, even on the shortest of live branches, so the lack of insect pollination and seed production is not a reason for the rarity of this plant. The leaves are around 5 cm (2”) in length, quite resinous and distinctly warty. The flowers are white and about the size of your little fingernail and over the year are progressively produced along flowering stems (except winter or very dry periods).

Myoporum turbinatum has a Conservation Status: Declared Rare, which means it has been adequately searched for, and is deemed to be either rare, in danger of extinction, or in need of special protection.