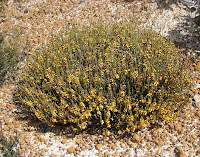 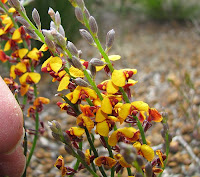 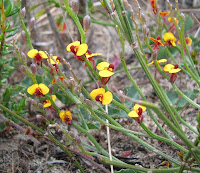 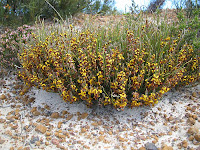 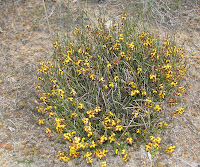 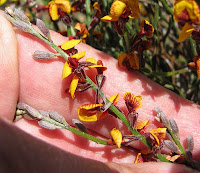 
Jacksonia is one of the many peaflower genera from the legume Fabaceae family, which now also includes Acacia, Senna, etc. Jacksonia venosa is a small shrub mostly between 10-20 cm (4”-8”) in height and spreading to 60 cm (2’) diameter. It is very common in near coastal locations from Ravensthorpe to Israelite Bay, with Esperance centrally placed between.

There are several similar looking Jacksonia plants in the district, but Jacksonia venosa is easily distinguished by their relatively near coastal distribution and the flowers, which are strongly veined red on the back of the standard. It normally grows in a heath environment on a variety of non-calcareous sand and/or gravel soils.

Jacksonia as a group, are usually easily placed in the genus by the long sepals, which are mostly strongly reflexed to point away from the flower. Also many are leafless and some have flattened stems. The flowers are invariably yellow and orange, merging to red. Once two or three species have been seen, others can be slotted with little effort, although taking them to species level can be tricky.

Several Jacksonia spp. are very opportunistic regarding unseasonal rainfall, by quickly coming into flower to take advantage of a good soaking, so often flowers can be found during a wet summer, although not as numerous as from August to October, which is their main flowering period.