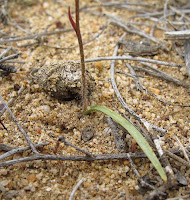 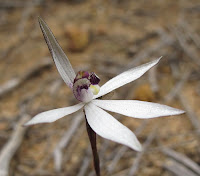 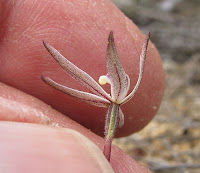 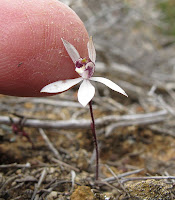 
Ericksonella saccharata has been known as Glycorchis saccharata and Caladenia saccharata, but the genus was changed to Ericksonella in 2004. The orchid is less than 15 cm (6”) in height and often occurs in large colonies. Although a delicate looking plant, it is a hardy inland species of 50 km (30 miles) or more from the coast, with an average annual rainfall between 20-30 cm (8”-12”).

It naturally occurs from Israelite Bay (east of Esperance) to inland Albany and Perth, SE of Geraldton, then spreading to the Kalgoorlie region, an area not known for many orchids. The orchids above were encountered on a gravel soil inclusion that was located in the mallee zone around 100 km (over 60 miles) NW of Esperance. The gravelled area had been partly quarried for road making and these orchids were growing around the sloping excavated edge (covering several hectares) and numbered in their hundreds, if not thousands. Ericksonella saccharata is recorded flowering during August and September, which for these semi-arid environments is usually pleasantly warm with regular rainfall.

My thanks to Lyn and Eric Alcock from Tasmania for drawing my attention to this orchid; they are regular visitors to Western Australia and very knowledgable orchid/wildflower enthusiasts.