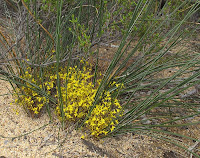 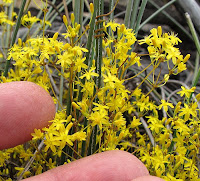 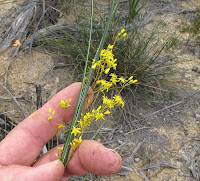 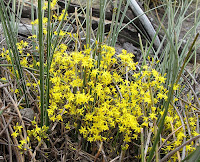 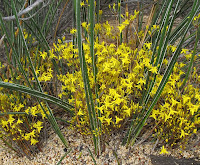 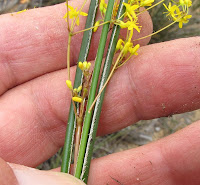 
In many places including Western Australia, the Chamaexeros genus is now included in the Asparagaceae family, but is still recognised in Liliaceae or Laxmanniaceae by some authorities. It has also been placed in Xanthorrhoeaceae and Dasypogonaceae, which illustrates the taxonomic complexity of this group of plants. Chamaexeros fimbriata is the sole species (from a total of four) that is found in the Esperance region and then only in the northwest mallee region.

Chamaexeros have tufted leaves originating from a short underground rhizome to produce a dense tussock, with this species growing to over 60 cm (2’) in height. A considerable number of flowers are produced on complex branching stems near the ground to form a low tangle of golden/yellow flowers, which are supported on fine stems of great delicacy. The flowers are reputed to open only at night, however the above were encountered around mid-day, but it was overcast.

The fine floral stems need excellent surface drainage to avoid fungal disease, which is probably why they only occur inland with low rainfall (around 30 cm or 12” per annum). The soil in the photographs above have coarse sand on the surface (an unusual feature in this district), overlying finer sand, which is then over a clay/gravel base. The plants were restricted to a small reasonably flat area (well drained), but still retaining subsurface moisture needed for flowering, which depending on seasonal rainfall is anytime between June and September.