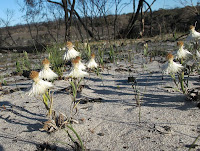 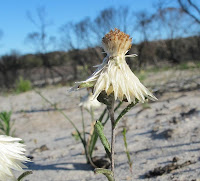 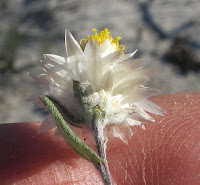 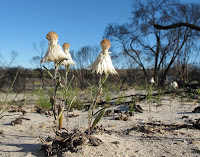 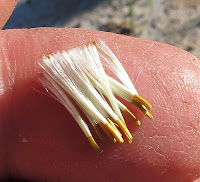 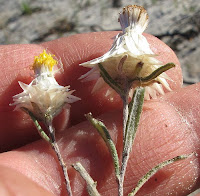 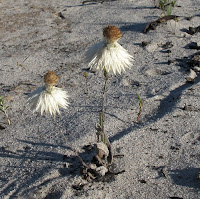 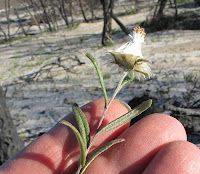 Plants in the genus Helichrysum belong to the large Asteraceae family and are commonly known as everlastings. This is because when dry, many retain their shape and color, which can then be used as long-lasting cut flowers. Helichrysum leucopsideum despite initially appearing as an annual is actually a perennial, although it may die back to the rootstock in very dry conditions, to resprout the following growing season.

The photos above were taken the first growing season after a bushfire, so the plants are relatively small to 15 cm (6”) in height, but next year with an established rootstock will probably grow to more than twice that height. This species is not particularly common around Esperance and is mainly encountered to the North and NE of the town, growing in sandy loams of the mallee region. Its main WA area of distribution is further west to the north of Albany and east of Perth, it is also found in SA, Victoria, NSW and Tasmania.

I was attracted to these small plants by their colourful toadstool appearance, due to the vertical stems and strongly reflexed white bracts, however in some areas the bracts are not as recurved. The underside of the leaves are covered in cottony hair, whilst the tops have only glandular ones. Flowering occurs from September to December.