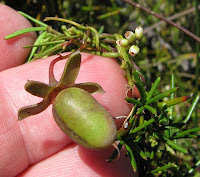 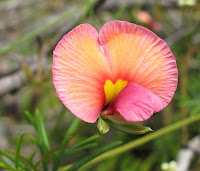 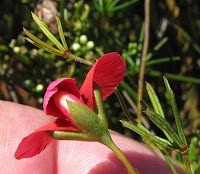 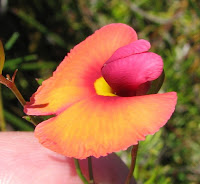 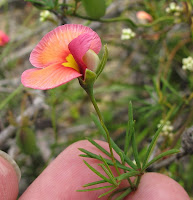 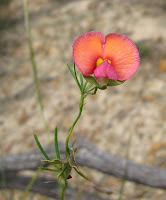 
This large colourful pea-flower from the Fabaceae family, twines and climbs on neighbouring vegetation to around 1 metre (over 3’) in height. However, it is rarely noticed except when its 2 cm (3/4”) diameter flowers, with their bright splashes of color come into bloom. These are designed to attract a pollinator, but will do the same for any wandering person passing by.

Gompholobium flowers tend to be quite chunky and very eye-catching, with their clean bright colours and rounded shape. The leaves of most species are compound, either pinnate or as in this case digitate (hand and fingers like); Gompholobium polymorphum as its name suggests can be quite variable, with the digits differing  in length and width, but around Esperance they are mostly linear as shown above. As this species is widely distributed from east of Esperance to north of Perth it probably has several local forms.

Gompholobium polymorphum favours gravel soils, particularly around granite outcrops, where rainfall run-off would supply additional moisture to help it over its locally late flowering season from November to January, although they are recorded blooming from September. This species is also known to produce totally yellow flowers, but I have not seen them around Esperance.

Posted by William Archer at 5:15 PM