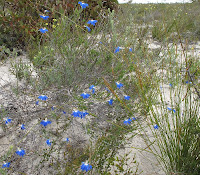 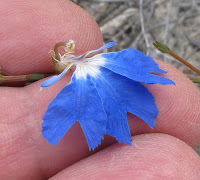 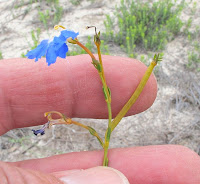 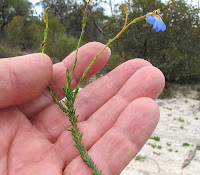 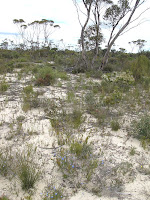 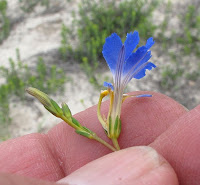 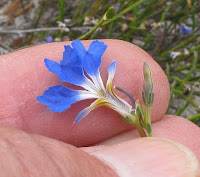 
Lechenaultia brevifolia is another species that can germinate in considerable number after bushfires, but can also persist in natural openings in heath to the North and NE of Esperance. Locally it is found in deep yellow sand, which occur like islands in the inland mallee region, whose soil normally consist of a fine sand/clay loam over limestone. These sandy islands are often quite large to cover a square kilometre/mile or even larger and have a heathland vegetation with many species normally encountered in coastal regions, although not this one. Outside the Esperance region, it has been found further to the NW of Esperance and inland as far as Kalgoorlie, particularly on red sands.

This species is often mistaken for Lechenaultia biloba, particularly as some popular but old botanical keys do not contain Lechenaultia brevifolia, as it was only described 1986. However L. biloba does not occur in this district. In the Esperance region, L. brevifolia is very similar to Lechenaultia heteromera (see post under that name in lower right-hand column), but that species only grows in near coastal locations west of Esperance and does not overlap with this one. Taxonomically, these species differ radically with the size and arrangement of their leaves, with L. brevifolia having leaves to only 3 mm (1/8”) in length, which are crowded at the base of the flowering stem, but sparse in the upper part. There are other differences too, which can be seen if both posts are viewed.

Owing to the open sparse nature of this shrub, it is easily overlooked when not in flower, but when with bright blue flowers you cannot ignore it, as they seem suspended in mid-air. Flowering is recorded from July to December, but this timing will vary depending on location and local rainfall. Around Esperance, October to December would be the usual period.