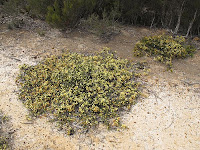 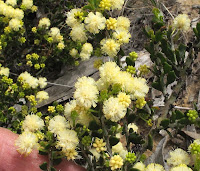 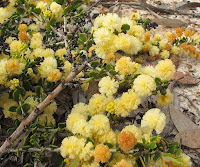 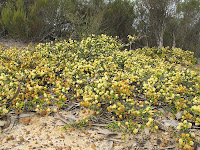 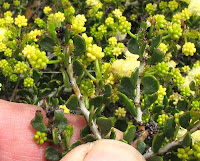 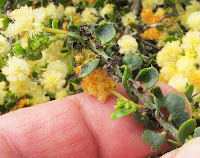 
In line with the system now adopted by the WA Herbarium, the genus Acacia has been incorporated into the Fabaceae family, but may be represented by other families elsewhere depending on the classification system in use. Where Acacia bidentata above was photographed it is at its most easterly range off Parmango Road, 85 km (over 50 miles) NE of Esperance, where locally common growing in a fine sand/clay loam over limestone. In this typical mallee environment, it occurs on the cleared roadside edges, plus under shrubs and mallee eucalypts, but can also be found in a variety of soils as it extends to the west of Esperance to Albany, then NW to the Geraldton region.


Acacia bidentata can be semi-prostrate or a dome shaped shrub, spreading to 2 or more metres (6’-8’). The flowers are a pale yellow or lemon color, turning pale orange with age. The phyllodes (leaf like petioles that function as leaves) are broadly triangular to oval, but with an asymmetrical main vein and mucro (point). There are 10-16 flowers in the floral head and the pods (not shown) are coiled.


In WA it is important that the flower color and pod (if available) are noted, as these are usually important distinctions when determining identification. There are many Acacia species around Esperance, particularly small varieties that are only seen when in bloom, then their often limited distribution can be appreciated as you pass through, for them to cease abruptly over a relatively short distance. So if you spot an interesting looking species when out driving, it is best to stop to investigate rather than hoping you will see it again further on.


Acacia bidentata is recorded flowering from July to October, but the earlier times are more likely to be from the northern part of its range. Around Esperance late August to late October would be more usual.