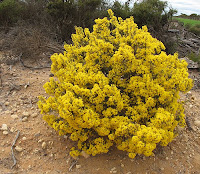 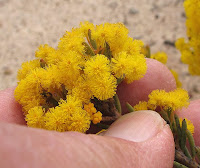 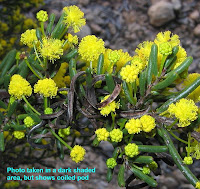 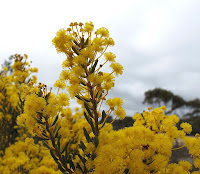 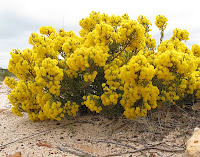 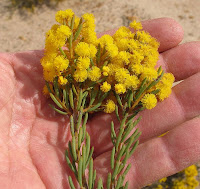 
The golden yellow flowers of this species exceed the length of the phyllodes (leaves) to produce impressive floral displays. However it is mainly an inland species, therefore only seen by a few adventurers prepared to travel the outlying wheat-farming gravel roads. It generally occurs in the mallee on a silty clay loam over limestone, often in low-lying areas on the edge of the broadacre farming perimeter, which probably also means much of this plants habitat has been cleared for food production.

Acacia binata has been confused with two other species that overlap in distribution, these are A. crassuloides and A. diaphyllodinea, but these usually have flatter phyllodes. With the former they are also shorter and broader 5-10 x 1.3-2.5 mm, and the latter wider 8-15 x 2-3.5 mm, whereas the phyllodes of A. binata are 8-17 x 1-1.5 mm. However, the most distinctive feature of this species relates to its name of binata and refers to the paired flower stalks (peduncles), which originate from a short but visible raceme axis (stalk below the joined peduncles). The peduncles of the other species lack this raceme axis stalk. These differences may seem small, but trying to define variations between bits of plants by description alone, is often more complex than visually comparing mature plants that as a whole, are obviously separate species.

This species grows to around a metre (3’) in height and ranges from NE of Albany (west of Esperance) to North of Cape Arid (east of Esperance). Flowering is recorded from August to October, with September being the optimum period.