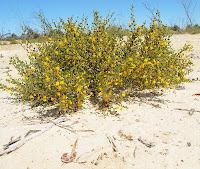 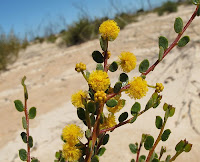 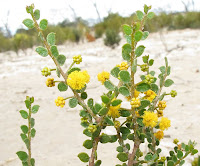 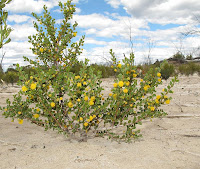 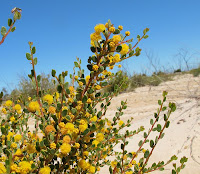 
Acacia brachyclada is predominantly an inland species and ranges from the east and SE of Perth, to north of Esperance and then east to Mt. Ragged. It can be locally common after bushfire or soil disturbance, but is otherwise not overly abundant. The foliage is very similar to Acacia bidentata, but with that species the flowers are pale yellow or lemon (see post in right-hand column), whilst A. brachyclada are distinctly golden yellow.

The pods of most Acacia spp. are notably different in shape and size and are taxonomically important, Acacia brachyclada has partially coiled pods that are rounded in cross-section and constricted between  seeds to produce a beaded effect.  In the top left photo, a pod can be seen in the foreground.

The phyllodes (leaves) of this species are slightly viscid (sticky) and shiny green.  It usually grows to less than a metre (3’) in height, but has a reasonably symmetrical spreading habit. Acacia brachyclada favours a mallee type habitat of low irregular rainfall and a fine sand/silt/clay soil over a limestone substrate. These conditions can be very harsh and have encouraged many species to become highly opportunistic to take advantage of any passing storms in order to produce flowers and seed. So the long flowering period recorded for this plant from August to February can be deceptive as it certainly does not flower continually over this period, but could do so more than once following good periodic rain. The down side of this survival advantage, is very few plants would flower in a drought year.

Posted by William Archer at 5:39 PM